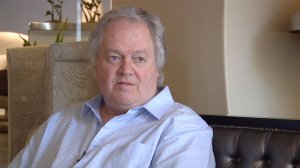 Jacques Pauw discusses his book The President's Keepers: Those Keeping Zuma in Power and out of Prison. (Camera & editing: Nicholas Boyd)

Investigative journalist Jacques Pauw exposes the darkest secret at the heart of Jacob Zuma’s compromised government: a cancerous cabal that eliminates the president’s enemies and purges the law-enforcement agencies of good men and women.

As Zuma fights for his political life following the 2017 Gupta emails leak, this cabal – the president’s keepers – ensures that after years of ruinous rule, he remains in power and out of prison. But is Zuma the puppet master, or their puppet?

Journey with Pauw as he explores the shadow mafia state. From KwaZulu-Natal and the Western Cape to the corridors of power in Pretoria and Johannesburg – and even to clandestine meetings in Russia. It’s a trail of lies and spies, cronies, cash and kingmakers as Pauw prises open the web of deceit that surrounds the fourth president of the democratic era.

‘An amazing piece of work, stuffed with anecdote and evidence. It will light fires all through the state and the ANC.’ – Peter Bruce

‘This is dynamite. Dynamite that will shake the foundations of the halls of power.’ – Max du Preez

Journalist and author Jacques Pauw was a founder member of the anti-apartheid Afrikaans newspaper Vrye Weekblad in the late 1980s, where he exposed the Vlakplaas police death squads. He worked for some of the country’s most esteemed publications before becoming a documentary filmmaker, producing documentaries on wars and conflicts in Rwanda, Burundi, Algeria, Liberia, Sudan, the Democratic Republic of Congo and Sierra Leone, among other countries.

When he left journalism in 2014, he was the head of investigations at Media24 newspapers. He has won the CNN African Journalist of the Year Award twice, the Daniel Pearl Award for Outstanding International Investigative Reporting in the US, Italy’s Ilaria Alpi and the Nat Nakasa award for bravery and integrity in journalism. He is the author of five books: four nonfiction and one fiction. They are In the Heart of Whore, Into the Heart of Darkness, Dances with Devils, Rat Roads and Little Ice Cream Boy. Three of his books have been shortlisted for major literary awards.

The President's Keepers: Those Keeping Zuma in Power and out of Prison is published by NB Publishers