Zuma back home from Brics summit in China

Zuma back home from Brics summit in China 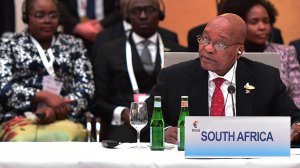 The summit took place from 3-5 September under the theme: “Brics: Stronger Partnership for a Brighter Future”.

Commenting on the summit the Presidency said Zuma “concluded a successful Working Visit to Xiamen”, where South Africa was named as the incoming Chair of Brics.

Leaders discussed issues of mutual concern aimed at achieving development, economic growth and prosperity, as well as peace and security which brought them together in the past 10 years.

The launch of the Africa Regional Centre of the New Development Bank (NDB) on 17th of August 2017 in Johannesburg, South Africa, was “noted with satisfaction” by leaders.

The establishment of NDB was welcomed and lauded as a major milestone for Africa, as it underlines Brics’ commitment to the development of the continent and emerging markets.

“The launching of the Bank, in Johannesburg recently, is indeed momentous. The idea of having our own Brics Bank is historical and a game changer, because it will handle matters of finance in a friendly way to the developing world,” said Zuma.

“The bank will first work with member countries and, with time, will extend to the rest of Africa and other countries.

“The Umzimvubu Water Project and the Moloto Corridor are just two examples of the projects the New Development Bank will work on immediately. We are also glad that the Bank has gained acceptance globally.”

“This year we had the biggest business delegation which indicates the amount of interest Brics has aroused,” said Zuma.

As Chair, South Africa will host the next Brics Summit in 2018.

“We look forward to hosting the Brics Leaders’ Summit in South Africa to take further our programme of development and prosperity for our countries. We have taken from China in this Summit, their incredible sense of organisation, the discipline as well as clear programmes and intended outcomes. We will build on these as South Africa next year,” said Zuma.

The Section 194 inquiry into Public Protector Busisiwe Mkhwebane's fitness for office heard more evidence on Thursday that showed that she shielded Ace Magashule and Mosebenzi Zwane from scrutiny over the Gupta-linked Vrede dairy farm project. Former Public Protector investigator, advocate Nditsheni Raedani, testified that he was part of a task team probing the Vrede matter. The investigation began under Mkhwebane's predecessor, Thuli Madonsela. He said he was aware of the GuptaLeaks – a tranche of leaked emails detailing the Guptas' and their associates' dealings - from the start of his involvement in the investigation. Through his interactions with his supervisor, Reginald Ndou, he was made aware that Mkhwebane didn't want them to look into the GuptaLeaks. "The Public Protector doesn't want the Gupta emails in the investigation," he said he was told. Furthermore, the investigation uncovered enough evidence to implicate Magashule, who was the Free State premier at the time, and Zwane, who was the agriculture MEC at the time, the committee heard. →