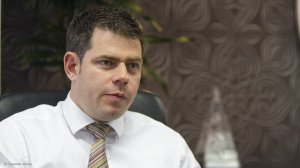 Earnings per share increased by 33.4% to 16.58c a share and the board approved the Elikhulu tailings retreatment project, subject to certainty on funding for the project.

The Uitkomst colliery contributed R21.3-million, or 8.5%, to group profit after tax and the PAR Gold transaction an additional 17.7% to group earnings per share.

He said Elikhulu reflected the company’s strategy of having long-life, low-cost high-quality production ounces, with the focus of generating attractive returns.

He added that the transactions completed in the prior financial year had positively impacted results in the current reporting period and had been extremely value accretive.

The company’s immediate focus, he said, was to recommence the Evander Mines underground mining operations, following the temporary suspension of mining to refurbish critical infrastructure, and to finalise the Elikhulu funding package.

The National Union of Mineworkers (NUM) said on Wednesday that it would hold a memorial service on Thursday for a mineworker who was fatally injured on February 15 at Pan African’s Evander gold mine, in Mpumalanga.

NUM also expressed concern that two of its members were given a final warning for raising health and safety concerns at Evander and the union is demanding that these be withdrawn.

The share price of Pan African Resources fell on Monday after the company issued a stock exchange news service notice announcing a 55-day suspension of mining following the death of engineering assistant Velile Chaplin Kapa, 54, who sustained a fatal head injury after a section of the main shaft pump column failed while he was working in the shaft bottom area.

By: Yvonne Silaule    Updated 5 hours ago

The Mpumalanga branch of the Congress of South African Trade Unions on Friday embarked on numerous marches across the province to commemorate the World Day for Decent Work, which also led to the handing over of a memorandum of demands to Mpumalanga Premier Refilwe Mtsweni-Tsipane. World Day for Decent Work is marked to address factors that impede workers’ rights, such as conditions of employment, safety and all other issues related to their physical and mental integrity in the workplace. Among the grievances raised by workers were corruption, job losses and retrenchment, the plight of farm workers and farm dwellers, as well as the informalisation of work through as labour brokering and casualisation. According to the Premier, the Mpumalanga province has its own economic recovery plan which primarily aims to ensure that its economy creates job opportunities for people and that investors find South Africa attractive. →