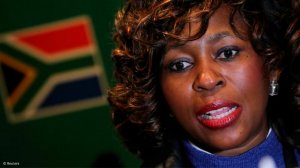 ANC MP Makhosi Khoza yesterday rejected an offer for protection services by Parliament, saying she cannot expect her ‘executioner’ to have mercy for her.

Khoza said in a statement that she is being persecuted because she can no longer tow the party line. She said she could not accept corruption, looting, a disregard for the people who brought them to power and the propping up of growing kleptocracy.

Khoza has been the subject of threats and intimidation for nearly three months after she started speaking out on the State of the ANC and its president, Jacob Zuma.

Publisher Penguin Random House South Africa on Monday said it had withdrawn the title from publication out of respect for Mandela’s family.

Madikizela-Mandela said only Ramlakan could explain who gave him permission to write the book.

And, Malema says only Zuma and his family are living better lives in KZN

Malema was speaking at a community meeting in Amaoti, ahead of his party’s fourth birthday celebration in Durban on Saturday.

Malema warned residents to stop voting for people just because they were from the province.