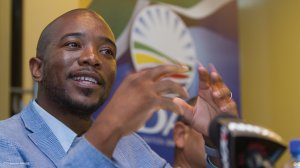 Opposition united in motion against Zuma, but divided on early elections

Opposition parties have united in recent weeks in calling for President Jacob Zuma to be removed, but appear divided on what should happen if the motion of no confidence against him succeeds.

The DA in Parliament yesterday said it would be better for the country to hold early elections if Zuma is voted out of power during the motion on August 8.

However, the EFF and United Democratic Movement disagree on holding early elections, with some party insiders arguing that it will "complicate and antagonise" ANC MP's which were considering supporting the motion.

The papers read that Mngxitama was to be arrested and imprisoned for a period of three months immediately upon the granting of this order on July 7.

Their application called on the court to interdict both BLF and Mngxitama from intimidating, harassing, assaulting, threatening, coming to the homes of journalists or acting in any manner that would constitute an infringement of the personal liberty of any journalists.

Maimane to hand-deliver petition signed by 1-million to Ramaphosa

The DA leader Mmusi Maimane is expected to hand-deliver a petition signed by an estimated one million South Africans to Deputy President Cyril Ramaphosa's office in Cape Town today.

Maimane said this was in anticipation of the vote of no confidence against President Jacob Zuma next Tuesday.

He brought the vote of no confidence against Zuma in March following a midnight Cabinet reshuffle by Zuma which saw Pravin Gordhan axed as finance minister.

An estimated 15 000 people are expected to protest in the Cape Town CBD on Tuesday ahead of the vote.


For a news update each morning, register for Polity’s free daily newsletter