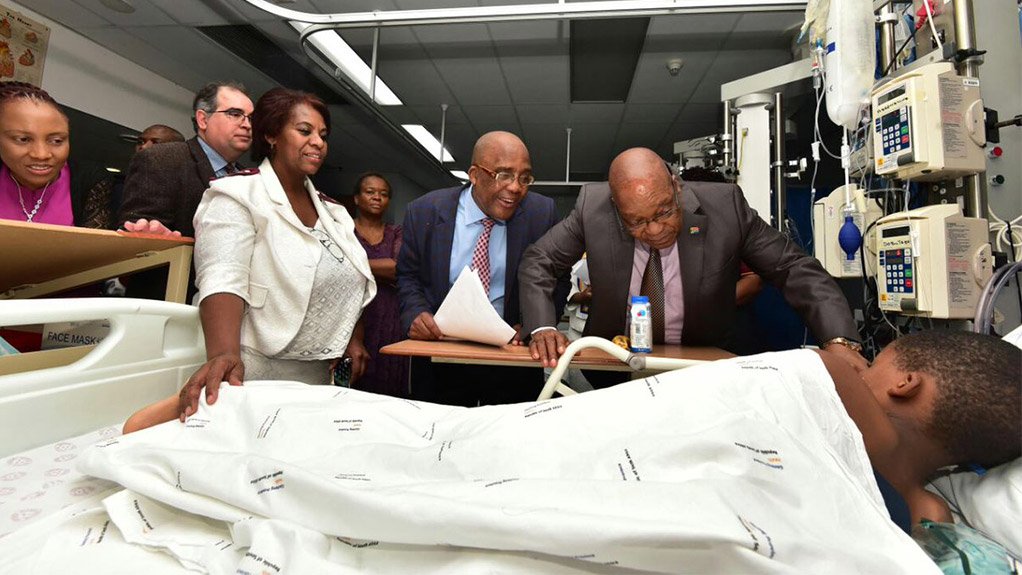 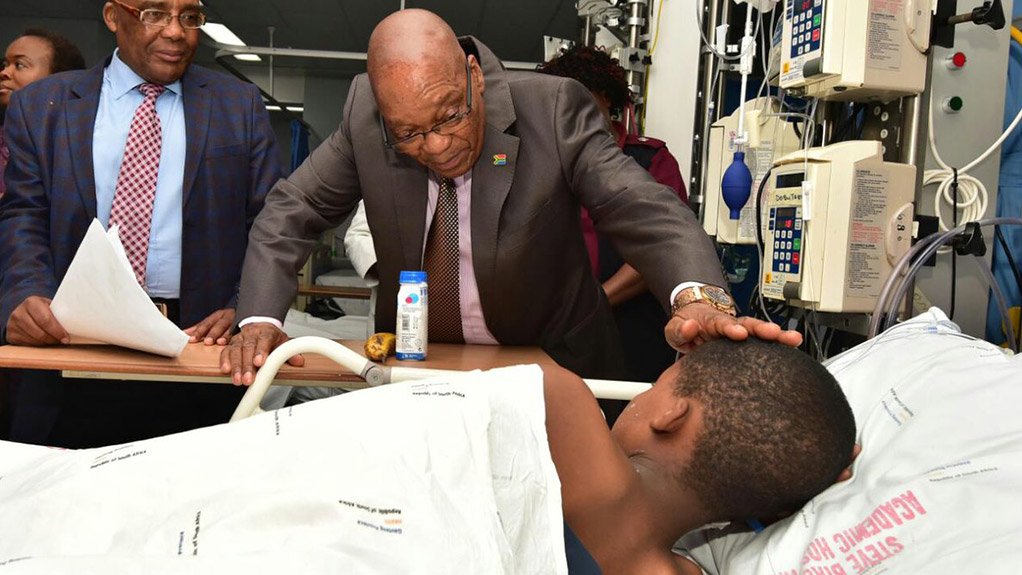 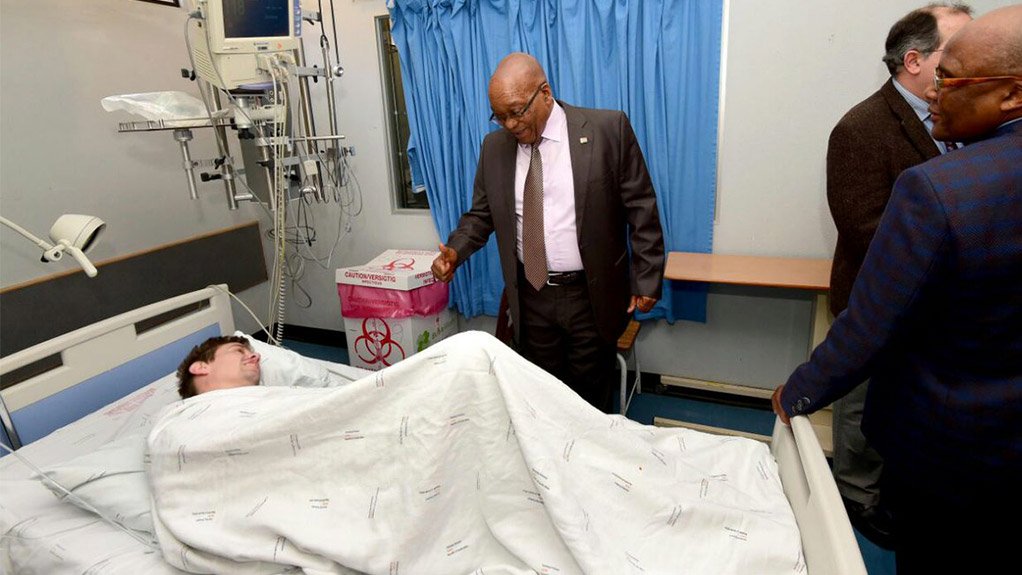 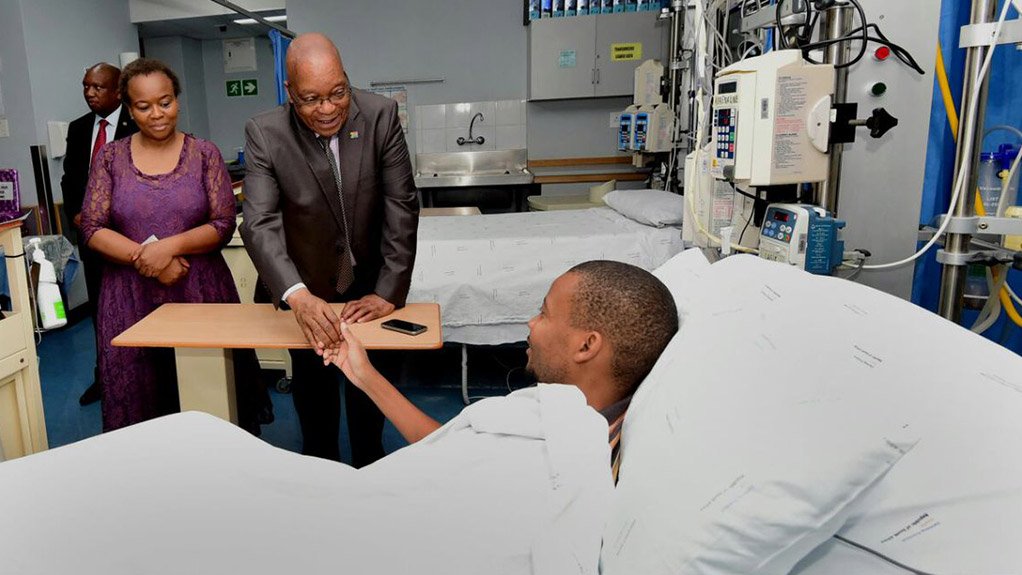 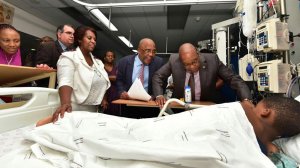 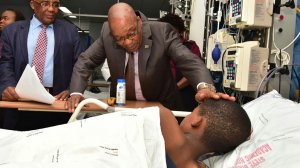 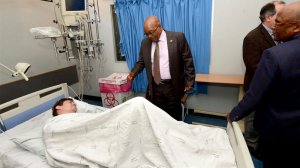 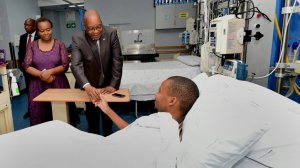 “The nuclear medicine unit which we have just visited…that even private hospitals from as far as Cape Town, Durban refer their patients here because the head of this unit has special skills which he went to learn in Europe. There is no other specialist in the whole country who has such a skill and that is why they refer all their patients here,” said Motsoaledi.

After a burst of laughter, Motsoaledi went on: “The positrons which are used in that unit are produced here in Pelindaba [South Africa’s main nuclear research centre] and they are exported to 60 other countries around the whole world. They are using the products which we produce here in Pelindaba, which we use here, but [also] export to 60 other countries,” said Motsoaledi.

The president said during his visit he had been greatly impressed by the Steve Biko Academic Hospital.

“I met committed people who are working here, at all different levels. I visited patients as well. I must say, this is one of the best things that I have come across this year, in terms of the medical facilities we have in the country. I’m very happy, I think the department has done very well on behalf of the country. I’m told patients come from all corners of the country, and from southern Africa. This hospital is the life saver of our people. It treats very serious kind of diseases,” said Zuma.

The president and his delegation were taken on a tour of one of South Africa’s best performing public hospitals, to monitor the delivery of healthcare services as part of the Presidential Siyahlola Monitoring Programme. Hospital CEO, Dr Mathabo Mathebula and Gauteng MEC for Health, Dr Gwen Ramokgopa were also part of the tour.

There was much excitement in the hospital corridors as patients and members of the public jostled to get a glimpse of Zuma. Many took their phones, trying to capture photographs of the president, who was also accompanied by a large security detail.

The major hospital, which is named after the late liberation struggle hero and a former medical student at the University of Natal, Steve Bantu Biko, is a tertiary healthcare institution, rendering specialized services to medically referred patients.

The Steve Biko Academic Hospital was declared the most well managed public hospital in the country by the Office of Health Standards Compliance which is the watchdog of the standard of health in the country, attributing the success to remarkable performance and sound management of the facility.

Corruption Watch executive director Karam Singh revealed on Tuesday that South Africa, along with many other countries, has reached a virtual standstill in its efforts to curb corruption, as human rights abuses and the erosion of democracy flourish. Corruption Watch unveiled Transparency International’s 2021 Corruption Perceptions Index, which is the leading global indicator of public sector corruption and ranks 180 countries and territories by their perceived levels of public sector corruption on a scale of zero (highly corrupt) to 100 (very clean). The CPI showed that 86% of countries have made little to no progress in the last 10 years, which Singh said was a concerning trend. →