Young entrepreneur elevates Mpumalanga poultry industry from the ground up

Young entrepreneur elevates Mpumalanga poultry industry from the ground up 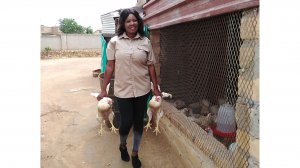 Photo by Supplied
At 30-years-old, Khethiwe Promise Maseko is already on the path to building one of the biggest chicken farming operations in her hometown of Ekangala in Mpumalanga

At 30-years-old, Khethiwe Promise Maseko is already on the path to building one of the biggest chicken farming operations in her hometown of Ekangala in Mpumalanga.

Through the Sasol I AM PRENEUR Programme, Maseko has combined her unshakeable drive for success with a keen eye for opportunity to establish one of the fastest growing businesses in the region.

Through R15 000 of seed funding from the I AM PRENEUR Programme, she bought corrugated iron, chicken feed and chicks to establish her first coup. With profits from operations, she built another coup and acquired new feeders and drinkers.

Maseko is an Oxbridge Academy occupational health and safety diploma graduate, but when she completed her tertiary education in 2010, she struggled to find work in her chosen field. Three years later she responded to a call for applications for the Sasol I AM  PRENEUR Programme, which focuses on instilling an entrepreneurial mindset in young people.

“I entered the 12-month programme in 2017 after three years of unemployment,” she says. “As soon as I got to grips with the course material, I immediately saw that there was a massive gap that I could take advantage of in my own community.”

Through the journey of learning the intricacies of business plan writing, marketing, budgeting, and project management, she realised that no one in her area was selling good quality live chickens in sufficient quantities.

People would have to travel long distances to other towns in order to find quality stock, an expensive exercise that forced some to compromise by opting for frozen “braai packs”, which didn’t guarantee a great, value-for-money product. “My solution was to buy the chicks and feed in Bronkhorstspruit and bring them back home to minimise transport costs for my customers,” she says. “I started with 50 chicks and they reached maturity to full grown chickens in six weeks, at which point the word had spread that I was selling chickens and I was instantly sold out.

“In the beginning, I was operating from my back yard and most of the chicks were dying before maturity, due to disease, malnutrition and climate exposure . The challenge was I didn’t have training in poultry rearing, I was getting most of my information from the Internet by watching YouTube videos,” she says.

Through mentorship and guidance in the programme, Maseko soon grew her stock from 50 to 100 chicks and was able to minimise the mortality rate of the chicks.

Maseko says most of her customers are males, many of them traditional healers  while the other customers just  prefer fresh  chicken that they’ve slaughtered themselves. She has a following of customers who will ask for chickens that have been freshly slaughtered and packed—a service she also offers at a minimal rate.

Today, she works from home, has two chicken coups, each coup accommodating 200 chickens. She rotates the chicks between the coups at various stages of maturity so that every three weeks she sells about 200 full-grown chickens. She charges  R70 per chicken.

She employs two employees, one permanent and the other a temporary worker, and is now looking to aggressively grow her business.

“My next step is to grow from 600 to 1000 chickens, around 200 a week,” she says. “Once I have enough capital, I’ll buy a van and build my own coups closer to home where my market is. In three years’ time, I want to supply my customers with 1000 chickens a week, which is entirely possible because the market is so strong here.” She aims to start selling her chickens to supermarkets and restaurants, expanding her operations to Witbank, which is an hour’s drive away, and offering work to unemployed youth and the elderly.