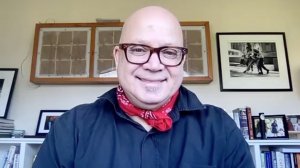 Ismail Lagardien discusses his book 'Too white to be Coloured, Too Coloured to be Black' (Camera & Editing: Shadwyn Dickinson)

“Written with brutal honesty and humility through the lens of a green-eyed ‘coloured’ in a country where Lagardien has never belonged, the book gives us a powerful and searing portrait of the annihilating consequences of race and identity politics as it courses through the apartheid era and the moral decay of racial essentialism in present-day South Africa.” – Malcolm Ray, The Tyranny of Growth

Too White to be Coloured, Too Coloured to be Black is a dazzling hybrid of memoir, commentary, first-hand observation and analysis, encapsulating defining moments of contemporary South African history and society. As a photographer, journalist, academic and columnist, the author forces a conversation between the present and the past of a country wracked by racial injustice.

In exposing details of his own life – how the personal is interwoven with the public, and how the past cannot be separated from the present – Lagardien provides a taut indictment of South Africa's politics of race and recrimination. Amid it all are his own struggles with being.

Throughout the book he pauses, often, on his own failures and shortcomings, in search of freedom; looking back, always, as if to find more pain in the past to perhaps fill the emptiness of displacement and meaninglessness.

Tortured by psychological and physical violence and struggles with his “coloured” white skin and green eyes, he eventually drifts away from the ties that bind one to family, faith, identity and community towards displacement.

Eventually Lagardien comes to accept his own helplessness and lack of purpose, without surrendering responsibility for his own choices. A triumphant marriage between intellectual rigour and personal disillusionment.

In the late 80s Ismail Lagardien worked as a reporter and photojournalist for the Weekly Mail and Sowetan. He studied at the London School of Economics and received a doctorate at the University of Wales. Today he's a leading political economist,  and writes for Business Day, the Daily Maverick and VryeWeekblad.

'Too White to be Coloured, Too Coloured to be Black' is published by Melinda Ferguson Books, an imprint of NB Publishers