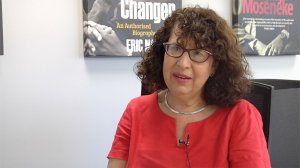 The Detainees’ Parents Support Committee (DPSC) was started in 1981 in Johannesburg, South Africa. It was set up by the parents, spouses and families of activists who were detained and had no recourse to legal intervention. Many in this movement had not been politically involved.

Members of the DPSC stood on street corners with placards calling for the release of their children. They organised food, clothing and legal representation for detainees across the country, and they supported the detainees’ families. DPSC activists marched, petitioned, argued, wrote and protested for the release of all detainees. They made public the brutal operations of the security establishment.

The DPSC helped to draw international attention to the atrocities being perpetuated against children – some as young as nine – by the apartheid state. And the evidence amassed by the DPSC helped to lay some of the groundwork for South Africa’s Truth and Reconciliation Commission (TRC).

The Knock on the Door tells the story of the DPSC and of how the anti-detention movement became part of the mass uprising that brought down apartheid. It is an inspiring account of ordinary people coming together to stand up against racism and the abuse of power.

Terry Shakinovsky is a journalist who has been deployed across the world. She holds a postgraduate degree in History. A former student and United Democratic Front (UDF) activist who worked with the Detainees’ Parents Support Committee (DPSC), she is now the publications coordinator at the Mapungubwe Institute for Strategic Reflection in Johannesburg.

Sharon Cort holds degrees in English, Fine Arts and Psychology. In recent years, she has worked as a researcher, curator and writer for various museums and heritage sites, including Constitution Hill and Freedom Park. In 2011 she co-authored One Law, One Nation: The Making of the South African Constitution with Lauren Segal.

Lauren Segal holds postgraduate degrees in History and Film and Television Studies. She has written several books and is currently a director of an exhibition and design company, as well as a curator and heritage consultant. She and Sharon Cort have worked together on numerous projects, including co-authoring One Law, One Nation. She was the project manager and content editor on The Knock on the Door.