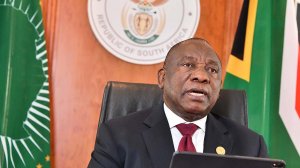 President Cyril Ramaphosa says African countries should not act like former coloniser countries by imposing unscientific travel bans after the discovery of the Omicron variant of the virus that causes Covid-19.

He said he wanted to engage with the four African countries – Egypt, Mauritius, Rwanda and Malawi – after the UK, US and much of the developed world imposed travel bans.

"I am concerned. Out of due respect to them, they have their own reasons. We would like to have a discussion with them in a way we prefer that they do not react like our former colonisers who are very quick to close Africa down," Ramaphosa told journalists.

Ramaphosa began his West Africa tour on Tuesday during which he will visit Nigeria, Côte d’Ivoire, Ghana and Senegal.

The week-long visit is an effort to strengthen relations with those countries and to push forward intra-African trade.

According to the Office of the Presidency, Ramaphosa will be accompanied by a delegation of ministers and business leaders in view of growing economic relations and people-to-people interaction between South Africa and these West African countries.

The tour begins with a state visit to Nigeria after and invitation from President Muhammadu Buhari.

Ramaphosa said, "A number of those presidents called to find out if we are still coming and we said yes, we are coming… we rejected this notion that has been propagated by more developed countries and some smaller countries that the Omicron variant should lead to a blockage and ban of travel. We rejected that."

The president also doubled down on his assertion that travel bans imposed on southern Africa in the wake of the new virus variant were discriminatory.

"We [are] insisting that these bans lifted and removed, you don’t contain viruses by imposing bans unscientifically and indiscriminately," he said.

The president said South Africa should be "applauded for having alerted the world about this variant that is beginning to spread around the world".

"We in the south have proven that we've got scientific capability to identify a very threatening variant of the Covid pandemic."

"The least we expected was to be punished by various countries," he said.

South Africa's health regulator reported on Thursday a causal link between the death of an individual and Johnson & Johnson's Covid-19 vaccine, the first time such a direct link has been made in the country. The person presented with rare neurological disorder Guillain-Barre Syndrome soon after being given J&J's vaccine, after which the person was put on a ventilator and later died, senior scientists told a news conference. "At the time of illness no other cause for the Guillain-Barre Syndrome could be identified," Professor Hannelie Meyer said. The person's age and other personal details were not disclosed for confidentiality reasons. Last July, US authorities added a warning to a factsheet for J&J's vaccine saying data suggested there was an increased risk of GBS in the six weeks after vaccination. At the time it noted 100 preliminary reports of GBS in vaccine recipients, including 95 serious cases and one reported death. →