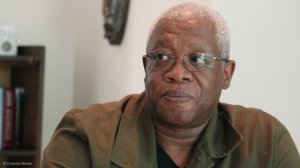 Aubrey Matshiqi on "SA needs a leader who will be able to cure the country’s ills" (Camera & editing: Darlene Creamer)

The election of the leader of the African National Congress (ANC) is not only about individual interests; that is, it is not only about the interests of the individuals who want to ascend to the throne. I am certain that it is almost always about either the ascendance of those that are outside the centres of power or the consolidation of the interests of those who want to hold onto power.

To the extent that some of the interests are regional, it is in the interests of the KwaZulu-Natal province of the ANC for the presidency of the party to remain in that province. This must happen for the simple reason that leadership battles are partly about ensuring that patronage networks remain in the province that won the leadership battle at the previous elective conference. In other words, the KwaZulu-Natal province of the ANC must make sure that the patronage networks do not relocate to another province.

In a broader sense, the patronage networks must remain within the dominant centre of influence, irrespective of whether the content of the dominant interests is configured in terms of class, political, race, ethnic or regional interests or in terms of a hybrid of interests. It is, therefore, not surprising that Nkosazana Dlamini-Zuma is emerging as one of the strongest candidates for the presidency of the ruling party. But she is emerging in the context of a KwaZulu-Natal province that is not as united as it was when President Jacob Zuma beat Thabo Mbeki in Polokwane about ten years ago.

Notwithstanding the fact that the ANC Women’s League has come out in support of Dlamini-Zuma, we should not preclude a scenario in which National Assembly Speaker Baleka Mbete and Women’s League president Bathabile Dlamini may decide to enter the leadership race. Also, we must not rule out the possibility that ANC treasurer-general Zweli Mkize and Minister in the Presidency Jeff Radebe may, under certain circumstances, enter the race too. Some ANC members have even suggested that Finance Minister Pravin Gordhan should be considered for the position, given the fact that he became the de facto President of South Africa by occupying the gap that was left by Zuma’s lack of leadership when it comes to managing our economic crisis.

The reality, however, is that the Premier League of the succession battle has two contenders, namely Dlamini-Zuma and Deputy President Cyril Ramaphosa. For the others to emerge as credible candidates, Dlamini-Zuma and Ramaphosa must suffer calamitous reversals in political fortunes.

Who, then, between Dlamini-Zuma and Ramaphosa will be the first to cross the finish line? In addition, does it really matter?

In relation to the 2019 general election, the majority of voters will take nothing less than demonstrable evidence that the ANC is changing direction. If it fails in this regard, it will not matter who is elected ANC president in December because that person is not going to succeed Zuma as the next President of South Africa. The outcome of the succession battle may mean very little to South Africans, especially those who were oppressed during apartheid, if the political majority remains a minority in the economy and other centres of power.

Even if the ANC wins the 2019 elections, the question is whether, between now and then, it will find a cure for the country’s ills. For me, people such as Ramaphosa and the leadership of the ANC in its entirety must convince the wretched of this country that a vote for the ANC is not an act of economic disenfranchisement. When it comes to confronting the fact that the persistence of racism in South Africa has a material basis – that is, the economic exclusion of the black majority – the ANC’s record is inglorious. One of the reasons the coincidence between race and economic disadvantage remains so strong is the ANC itself and its failure to match rhetorical commitments with substantive changes in the lived reality of those who were oppressed during apartheid.

Members of the ANC must ask themselves whether the generation of Dlamini-Zuma and Ramaphosa is equal to the task. If the evidence of the past 23 years is anything to go by, South Africa is ready for both a female leader and a new generation of leaders. We need, across the political spectrum, leaders who are independent of interests that are committed to the reinforcement of apartheid social and economic relations.

Born in 1957, Simon Tseko Nkoli had just turned 41 when he died, in 1998, of an AIDS-related illness. In his short life, the South African activist fought against different forms of oppression. He fought for those downtrodden because of their “race”. He stood up for those ostracised because of their HIV status. His greatest fight, though, was for those persecuted because of their sexual orientation. Nkoli was born and raised in Soweto, the largest black township in a South Africa ruled by a white minority who enforced apartheid, a system of racial segregation. His activism began in 1980 when he joined the Congress of South African Students, a youth organisation fighting apartheid. →