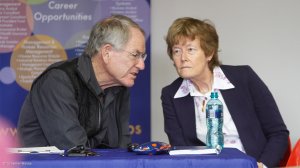 South African universities must face up to the challenge of making their economics curricula more relevant to local economic challenges and problems and they should modernise the way that they teach economics in line with global trends.

This was according to well-known economists Samuel Bowles and Wendy Carlin who delivered a guest lecture on curriculum reform in the teaching of economics at the University of the Witwatersrand’s School of Economic and Business Sciences.

“A very substantial fraction of South Africans are unemployed. It’s a problem which can be turned into an opportunity. Imagine if we could put these people to work in productive jobs to help meet the needs of the South African people. South Africa has immense talent. It can be mobilised and the country can join the rich countries of the world in future,” Bowles pointed out.

Both professors are spearheading an international project, Curriculum Open-access Resources in Economics, or CORE, which is an open-access, interactive ebook designed for those interested in the economy and economics, particularly at an undergraduate level.

CORE was launched in 2014 and has grown to include over 40 000 registered students and over 3 000 registered teachers across Europe, North America, South America and Asia.

CORE offers a question-motivated way to learn the tools of economics and seeks to be relevant, with the initiative positioning itself as a response to weaknesses in economics teaching, some of which were exposed by the global financial crisis of 2008 and 2009.

Carlin has pithily described CORE as seeking to teach economics “as if the last three decades had happened”.
She added that she believed that there were great possibilities in the country in terms of transforming the economics curriculum.

Palesa Shilabje, Chairperson of the Wits School of Economic and Business Sciences (SEBS) student council, stated that "An improved economics curriculum will also assist us in improving the socio-economic impact of our economic studies, our research and our input into policy making.”

Professor Jannie Rossouw, Head of SEBS, told the audience that "the transformation of the university is an important priority including increasing access for students from poorer backgrounds, employment equity, renaming of buildings to reflect our South African context, and also to look at what we teach and how we teach economics in order to best educate our students and have the most positive impact on society."

Dr Kenneth Creamer, an economics lecturer at Wits who was instrumental in arranging the visit by Carlin and Bowles, believes that “efforts in economics curriculum reform should be locally driven by staff and students, but such efforts will benefit greatly if they are also informed by global best practice”.

“As we enrich our South African economics teaching with local data sets, South African-specific case studies and our context’s pressing policy questions, we should also ensure that South African students and academics take part in global discussions on the role and future of economics as a discipline.  An improved economics curriculum will ensure that we train technically-competent economists who are also empowered to undertake better research and drive economic policy transformation to address growth and inequality issues in South Africa,” argues Creamer.

Carlin said the South African economy, and Africa more broadly in Africa, pose challenges to all economists and researchers and also helps to construct exciting relevant teaching material to create a new generation of well-informed citizens as well as policy makers.

Plans are under way to disseminate CORE to primary and high school learners in the near future.

For more information on the project visit http://www.core-econ.org/