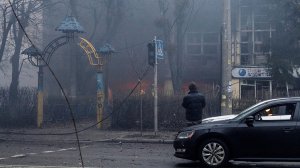 US Special Envoy for Global Food Security Dr Cary Fowler said the unprovoked Russian war against Ukraine has exacerbated the food crisis worldwide and is multicausal as the world deals with climate change and the Covid-19 pandemic.

Fowler was speaking during a press briefing on Food Security in Africa and Sanctions on Russia, where he said the war in Ukraine was pushing about 40-million additional people into the ranks of the food-insecure, which he said was a “totally unnecessary situation”.

Since Russia invaded Ukraine in February, Ukrainian grain shipments from Black Sea ports have stalled and more than 20-million tonnes of grain are stuck in silos.

Fowler said the US had invested funding into the Horn of Africa for humanitarian assistance and added that it would help develop more productive and resilient food systems.

“We have a programme at the United States Agency for International Development that we call Feed the Future. We’re in the process of expanding that programme. We’re supporting a great deal of research around the globe in international agricultural research centers and even in some of our own universities in the United States – for example, to develop drought-tolerant maize. We have, I think, about 16-million acres of US-supported drought-tolerant maize in Africa right now,” he revealed.

He warned that the world would not get out of the crisis simply by providing humanitarian aid such as food assistance, stressing that long-term development projects such as these were imperative.

Meanwhile, Office of Sanctions Coordination head Jim O’Brien said a promise by Russia to allow for the reopening of Ukrainian ports while threatening to invade was a hollow offer.

He said the US would like to see China act “like the large power it is” in helping to address the problem in the global food market.

O’Brien, however, expressed concern that China was building up its domestic stocks and continuing to purchase grain on the global market at a time when “we would love to see it be able to help those who are in need”.