Ramaphosa, Zuma in continuous talks as speculation of a recall mounts

Ramaphosa, Zuma in continuous talks as speculation of a recall mounts 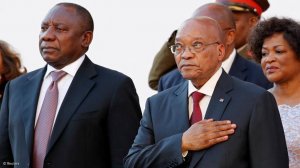 "The President and the president of the ANC continuously are actually meeting and engaging."

He was briefing the media on the sidelines of a special NEC meeting held on Wednesday, just days before Ramaphosa delivered his first January 8 statement in celebration of the ANC's 106 years of existence.

Magashule however, denied that there was any debate around two centres of power, adding that the party had resolved that the ANC was the only centre of power.

Sources inside of the NEC had earlier told News24 that Ramaphosa was scheduled to meet with Zuma during his visit to KwaZulu-Natal at the weekend.

Ramaphosa was said to be negotiating Zuma's resignation as head of state.

He was on a charm offensive in the province on Sunday and Monday, meeting with the party’s rival groupings in the province, Zulu King Goodwill Zwelithini and paying homage to past ANC presidents from the province.

The visit was seen as an attempt to soothe the wounds of the province’s embattled leadership after none of its candidates made it to the party’s top six.

The sources all agreed that it was now a matter of when, and not if, Zuma stepped down. But the priority was not "alienating his KZN support base".

Some NEC members are pushing for the newly elected leadership to recall Zuma and get the party on a "clean slate" ahead of the all-important 2019 national elections.

President Jacob Zuma however, has shown no intentions of resigning.