Ramaphosa speaks out against corruption

Ramaphosa speaks out against corruption 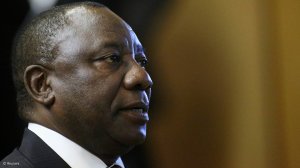 Cyril Ramaphosa speaks out against corruption.

Cyril Ramaphosa has called for the removal of "greedy and corrupt people" in an audio clip taken from a speech he delivered in KwaZulu-Natal this weekend.

He said the recent political event was a process that was going to bring about the renewal that the country needed.

He pleaded with South Africans to support the efforts that were going to be made "by those who want to make sure that our country lives up to the values of Nelson Mandela and Oliver Tambo".

"Let us act together in unity, unite our movement and country around one goal – making South Africa great, corruption free, and getting rid of greedy people and corrupt people," Ramaphosa declared.

Making headlines: Stage 2 load-shedding expected at short notice Ramaphosa says communities must not shelter criminals And, R745-million Eskom fraud case to resume in November after yet another delay →