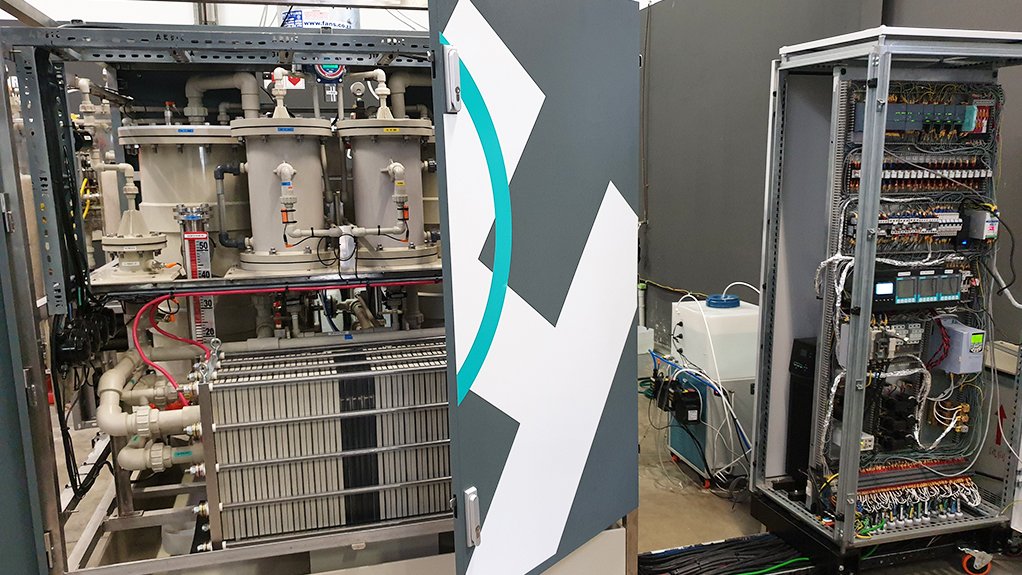 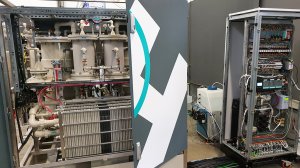 JOHANNESBURG (miningweekly.com) – At this time of huge coronavirus uncertainty, the chests of a group of engineers here must surely be bulging with pride following their major Proudly South African world breakthrough that could speed up the global deployment of hydrogen as a competitive universal and environment-friendly energy carrier.

Hydrox Holdings engineers, based in Strydompark, Randburg, have shot the lights out with a unique hydrogen electrolyser leap forward that deploys innovative patented and already trade-marked local technology that facilitates the use of far fewer components and generates significant cost savings.

This innovative technology promises to lower the production price of hydrogen and serve as a disruptive hydrogen economy enabler.

Standard electrolysers use a heat exchanger system to remove excess heat so that it does not supersede the maximum operating temperature of the membrane. Within DEFT, this excess temperature can be ‘locked’ into the system to improve system efficiencies, resulting in lower operating expenditure and hydrogen costs. The new system can also handle fluctuating currents, which makes it ideal for renewable energy and ‘green’ hydrogen.

Electrolysis electrochemically splits water into hydrogen and oxygen and for more than a century, electrolysers have been limited to lower temperatures and pressures, with electrolysis basically being undertaken using some or other form of membrane to keep the gases separate.

Now the world has a new Proudly South African system which has been achieved with the financial support of the Gamechanger programme of petroleum giant Shell, which provides businesses with seed funding to advance unproven early-stage ideas that have the potential to enhance the future of energy.

Support from Shell has been vital to Hydrox Holdings, which is a recipient of South Africa’s National Science and Technology Forum Award for Innovation.

The company’s objective is to produce hydrogen below R100/kg, making it cost competitive with petrol. Its intention is to make hydrogen readily accessible to the public by adopting the single-pump model, which was once used at filling stations by the long defunct Satmar and then later by Sasol in its early days.

“It’s a major deviation from the standard technology of employing membranes with the associated challenges created by it,” said  Hydrox Holdings CEO Corrie de Jager in his email to Mining Weekly.

“We’re currently doing extensive testing of the unit with a view to scaling it to industrial size. This process has, unfortunately, been interrupted by the coronavirus lockdown but testing will again resume in April,” he added.

The elimination of costly membranes and fewer working parts reduce capital resulting in lower production costs. The price of hydrogen does not necessarily need to be cheaper than the price of diesel or petrol, as the cost per unit distance travelled needs to be more cost effective.

Fuel cell electric vehicles are far more efficient compared with diesel or petrol vehicles and even if hydrogen comes at a slightly higher price than diesel or petrol, it would still provide more kilometres culminating into a cost saving. No carbon dioxide (CO2) is emitted from the water electrolysis process, nor is any CO2 produced when hydrogen is converted to usable energy in a fuel cell, provided green hydrogen is used.

However, the biggest boost for the platinum market will not be from the generation of hydrogen but rather in the conversion of hydrogen to electricity in fuel cells. The fuel cell catalyst is solely dependent on being fabricated from PGMs, owing to the acidic environment of the fuel cell. Inexpensive available hydrogen would unlock the fuel cell industry and thereby increase the demand for platinum.

Hydrogen is being increasingly viewed as a logical means of storing renewable energy and supplementing the local electrical grid. By converting to a hydrogen economy, the need to build additional power stations would be eliminated as excess power produced during times of low demand can be stored as hydrogen to provide the grid with power during peak demand.

Creamer Media first reported on the electrolyser journey of Hydrox Holdings' in 2015, in the context of a conference in Cape Town in December 2014, where scientists discussed the challenges inherent in developing fuel cell materials and membrane electrode assemblies for transport and stationary electricity generating applications.

At that stage, it was stated that it would be beneficial to be able to produce usable hydrogen without membranes, as these membranes were unable to withstand the pressures and temperatures during production. At that stage, a green energy house using solar power to obtain hydrogen and function independent of the national grid was under discussion.

South Africa has the combined solar and wind potential to produce competitive hydrogen, which can meet the world’s new environmental requirements.

This country’s solar and wind power provide a hydrogen production capacity factor of close to 100% during daylight hours and 30% during the night, which is above the international norm of about 22%, according to Council for Scientific and Industrial Research (CSIR) senior research engineer Thomas Roos. South Africa also has the platinum group metals (PGMs) used in the fuel cells that can produce electricity from hydrogen.

Seawater close to a port can be electrolysed to produce the hydrogen, which can be exported and domestic hydrogen demand can be met from contaminated water sources, such as acid mine drainage and brackish underground Karoo water.

A potential site is the Eastern Cape’s under-used deep-water Port of Ngqura, where the Coega Special Economic Zone already has a renewable power designation. The desalination plant could simultaneously provide water to the Eastern Cape, where water shortages arise from time to time.

As demand for hydrogen is building globally, the export potential of clean renewable hydrogen is also under scrutiny in South Africa.

If South Africa could capture a 25% share of the estimated 800 000 t/y hydrogen demand from Japan, this would be a $600-million-a-year chance for South Africa to offset the decline in coal export earnings.

About 95% of hydrogen is currently obtained from fossil fuel sources, resulting in the release of carbon dioxide into the atmosphere.

But green hydrogen’s momentum is building up at a time when the coronavirus-hit world is expressing the need to decarbonise with greater effectiveness. Green hydrogen is generally produced by splitting water into hydrogen and oxygen in electrolysers, with some of them also using PGM catalysts.

Hydrogen carries 39.2 kWh of theoretical chemical energy per kilogram making it one of the most energy dense non-nuclear energy carriers. In the release of this energy, only water is emitted. Hence, if hydrogen is generated from renewables, its use in energy is a carbon neutral process.

On a weight-for-weight basis, hydrogen carries four times more energy equivalent than petrol. Along with this, hydrogen fuel cells see efficiencies higher than 60%. The demand for hydrogen is being driven by many initiatives taking place around the world.

Not a day goes by without a new announcement about the building of hydrogen fuel cells and the use of hydrogen to power trucks, buses and trains.

Platinum is used in fuel cells because it is the most stable and active monometallic catalyst. As an inert metal, it is not consumed or modified by the reaction, making it durable and long-lasting.

Hydrogen produced from renewable-energy sources can be chemically combined with CO2 from the air or from CO2 emission sources to produce carbon neutral methanol, dimethyl ether or other fuels or additives. Methanol can be used as a fuel or can be added to petrol to lower pollution levels. Hydrogen is a clean fuel as there are no greenhouse emissions associated with it.

By creating a hydrogen infrastructure, South Africa would unlock the full platinum potential as more fuel cells will be sold. There is already demand for hydrogen from the mining industry for underground mining vehicles, power generation and ore purification.

Within South Africa, a number of large companies, such as Sasol and Eskom, have been cited as major point sources of CO2 and sulphur dioxide emissions, the CO2 can be recaptured and used in conjunction with hydrogen to generate more fuels. Hence, the reduction in CO2 emissions would be a possibility along with maximising the profits generated by these companies.

Some companies rely on hydrogen to produce some of their more valuable products, such as processes within Illovo sugar. Switching to hydrogen is going to have a lasting positive effect on our environment and country as a whole.

Hydrox Holdings has been approached to join an international consortium of scientists who wish to take advantage of its technology to achieve high temperature electrolysis.

Despite the ongoing electricity shortages and supply chain disruptions, the total gold production of Harmony Gold has increased quarter-on-quarter, the Johannesburg- and New York-listed company, which will be presenting at next week’s Investing in African Mining Indaba in Cape Town, stated on Wednesday. The quarter-on-quarter production increase was ascribed mainly to improved underground recovered grades mined during the second quarter of Harmony’s financial year 2023, which were higher than the 5.45 g/t to 5.60 g/t guided earlier this year. Underground recovered grade guidance for the full year remains at between 5.45 g/t to 5.60 g/t, however. →