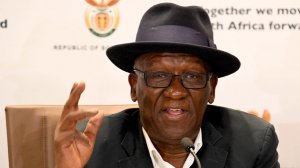 Police Minister Bheki Cele has confirmed that statements are being taken from politicians who allegedly involved themselves in the double voting scandal on election day.

During a post-election debriefing on Monday, the Justice, Crime Prevention and Security (JCPS) cluster would not confirm that investigations had been initiated, instead saying that a process had been launched.

"There is indeed a process that statements will be taken, including those politicians who put themselves in the position of trying to interfere with elections," Cele said.

Economic Freedom Fighters national chairperson Dali Mpofu told eNCA on Thursday night that, after receiving reports of double voting in the Eastern Cape, he had asked members to test the system, according to The Citizen.

"I was speaking to someone from the DA [Democratic Alliance] later, when I arrived here before the closing, and I asked them to do the same thing, and I think they did it in Soweto.

"I don’t know conclusively, but the person that I had spoken to said the tester was able to vote 10 times."

Mpofu told the broadcaster that double voting was electoral fraud and that any person involved should be prosecuted.

Congress of the People MP Deidre Carter told a media briefing that she had tried testing the system, claiming that she could have voted a number of times using her own ID.

According to News24, Carter said she removed the mark on her thumb with bleach and then visited a number of stations where she got a slip that would have allowed her to vote if she had filled in a VEC4 form.

She then reported the matter to the Electoral Commission of South Africa (IEC).

At the media briefing, Cele said that 22 people had been arrested for attempting to vote for a second time.

"Nineteen suspects were arrested in KwaZulu-Natal, of which 17 were alleged to have transgressed in Dannhauser, two in Hluhluwe, one in Sawoti and one in Izingolweni, whilst the 22nd suspect was arrested in Douglasdale in Gauteng," Cele said.

Furthermore, two people were arrested on election day after a video was posted to social media, claiming that they had voted more than once.

"Etienne Mare, 52, posted a video claiming that he was on his way to vote for a second time after hearing from Malinda Halloway, 57, that she had been 'able to do so herself'."

Mare and Halloway appeared in the Barberton Magistrate’s Court on Friday, facing charges relating to the contravening of Section 88 (d), voting more than once; Section 89 (i)(a), intentionally making a false statement, alternatively of fraud; and Section 90(2)(a), infringement of secrecy, Cele said.

"Law enforcement agencies will leave no stone unturned in bringing the perpetrators to book."