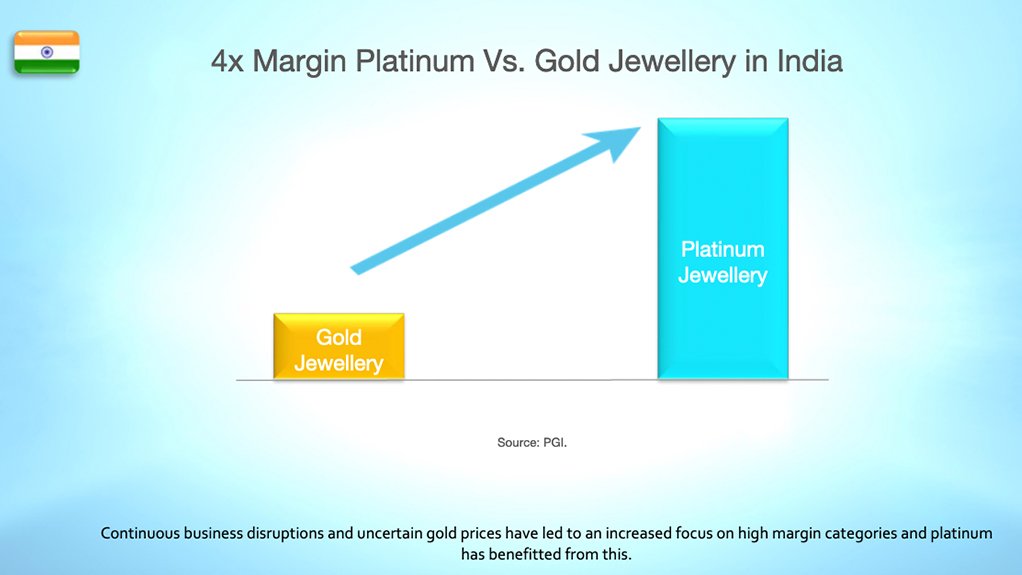 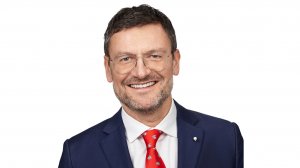 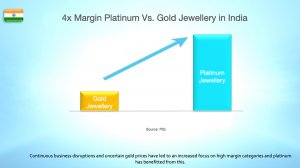 JOHANNESBURG (miningweekly.com) – Several reports published during Platinum Week indicate that in 2021, platinum jewellery consumed anywhere between 1.6-million ounces to two-million ounces of platinum, which makes it still the second highest demand source after automotive, coming in at around 25% of total platinum demand.

This year, the US and Japan are already above pre-Covid levels, exceeding 2029 data in terms of total ounce consumption – and India has seen quite strong V-shaped post-Covid recoveries.

In those three markets, continued 2022 strengthening is in sight, with only China the big concern.

"India is a very, very exciting market. That saying ‘don't put all your eggs in one basket’ is a good thing here. When we see China demand continuing to be soft, it's really important that we're doing what we can in India, because that really is the next frontier for platinum," said Daniel. (Also see attached image.)

Platinum Guild International has contributed more than 80-million ounces of platinum demand since being established in 1975 by first identifying opportunities for platinum in jewellery and then developing them with partners.

“When it's very important that the industry plans for the next generation of demand, let's not forget that we already have 25% of platinum demand coming from jewellery, and that doesn't happen automatically.

“Our sponsors have been amazingly committed to platinum, led by Anglo American and Impala Platinum, with contributions also from Northam and Royal Bafokeng.

“Those four companies really have stuck by us, and I would just say there’s so much potential for platinum in the jewellery space. The world needs a high-quality pure white precious metal, there's a market for that, and it's up to us to develop it,” Daniel emphasised.

During the height of the pandemic, in those markets that did not experience a complete lockdown, platinum was able to benefit from the significant shift in consumer spending towards watches and jewellery.

In addition, the platinum price is in a favourable position compared with gold, certainly for Western and developed markets, not so much for China.

“The Chinese really need to see a bull market when it comes to the price of platinum for them to really get in there and commit to it.

But certainly in the US, Japan we've not seen such favourable pricing for a while, so there has been quite a bit of substitution of platinum for 18 ct gold, which is our main competitor in those markets,” said Daniel.

To boost demand still further, Platinum Guild International is working with the bigger players who are the market makers.

“We find we get a lot of traction when we partner very closely with these big companies and get their C suites to focus on platinum,” said Daniel.

“The main brands are the retailers, so we've made a concerted effort to leverage branded collections as a way to offer retailers a product that's differentiated and a product that’s got a story,“ he said.

In China, Platinum Guild International has pivoted upstream to work more closely with the jewellery industry to promote faster innovation.

In Japan, where it is highly dependent on an aging consumer base, it has made concerted efforts in the last couple of years to engage the younger consumers through the Platinum Woman programme, which has introduced a whole new category of jewellery into the market that is affordably priced and can be either gifted or self-purchased. Typically these products retail from around about $900 to $1 500, with the sweet spot around about $1 000.

“What drove the platinum business was the bridal category, where we were seeing higher purity and heavier product being consumed, and a class of jewellery, which doesn't really exist in other markets, which is asset jewellery. Those are chains of various weights and thicknesses that consumers buy as jewellery but also as an investment,” said Daniel.

Mining Weekly: How are India's platinum jewellery needs being met?

We have very different business model in India. From the beginning, we built branded segments that were unique to platinum, to distinguish it from gold. The product was sold on a piece basis and not on a weight basis, which other pure metals are sold by, and by doing that, we were able to secure a very healthy and attractive margin for the retail trade, so platinum is in a really sweet spot in India. It offers the retailer differentiated product and India's the market where we do the most direct-to-consumer marketing. We've created quite a movement among the younger, more affluent urban consumer to embrace platinum as a metal which represents the more progressive values of the younger generation, and that is both for gifting and self-purchase.