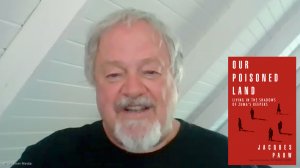 Our Poisoned Land, is the sequel to Jacques Pauw’s super-selling The President’s Keepers.

A publishing phenomenon and South Africa’s fastest-selling book ever, The President’s Keepers has sold over 210 000 copies since its publication in October 2017. This book became part of a social movement, and a shorthand for opposition to corruption and cronyism.

In Our Poisoned Land, Pauw, in his signature narrative style, picks up where he left off in The President’s Keepers to expose the shadows, deceit, and debauchery of Zuma’s cronies.

What went wrong? Once again, Pauw delves deep to find answers. Among his shocking findings are top police officers who had a hand in state capture still ensconced in the Hawks and police Crime Intelligence; a cabal of state-capture prosecutors within the NPA; a police minister cavorting with a convicted drug smuggler; and South Africa’s “own Guptas” living in the lap of luxury after the case against them “disappeared”.

In Our Poisoned Land, Pauw ends the epilogue by saying “Ramaphosa lacked the courage and urgency in his first term as president. He now needs to change the course of this poisoned land. If he fails, we will again be at the mercy of the keepers.”

Our Poisoned Land is as riveting and explosive as its predecessor.

Jacques Pauw has been a journalist since 1984 and has written for some of the country’s most esteemed publications before becoming a documentary filmmaker in 1994, specialising in investigating criminality and the abuse of power on the African continent. He produced documentaries on i.a. conflicts in Rwanda, Burundi, Algeria, Liberia, Sudan, the Democratic Republic of Congo and Sierra Leone. His work has been shown around the world and he has received several national and international awards, including the Media Institute of Southern Africa’s award for investigative journalism, the Vodacom Journalist of the Year Award and the Nat Nakasa Award for bravery and integrity in journalism. Internationally, he has won CNN’s African Journalist of the Year twice; Italy’s Ilaria Alpi television award; and in the United States, the Daniel Pearl Award for Outstanding International Investigative Reporting. He is also a recipient of the Ahmed Kathrada Excellence in Leadership award.

Apart from journalism, Pauw has also authored several books: In the Heart of the Whore: The Story of Apartheid’s Death Squads in 1991; Into the Heart of Darkness: Confessions of Apartheid’s Assassins in 1997; Dances with Devils: A Journalist’s Search for Truth in 2007; the novel Little Ice-Cream Boy in 2009; Rat Roads: One Man’s Incredible Journey in 2012 and The President’s Keepers: Those Keeping Zuma in Power and out of Prison in 2017. It became the fastest-selling book since Nielsen BookData started auditing South African book sales in 2004 and has sold more than 205 000 copies. This book became part of a social movement, and a shorthand for opposition to corruption and cronyism. In 2018, Pauw and NB Publishers were awarded the Association of American Publishers’ prestigious International Freedom to Publish Award for the publication. The book also received the Nielsen Booksellers Choice Award.