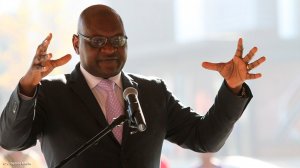 The Gauteng provincial government (GPG) has established an economic advisory panel to advise it on the roll-out of social and economic infrastructure projects planned for the next two years.

GPG aims to leverage the various infrastructure projects planned for the next two years to promote the implementation of its strategic aim of progressing  “employment, empowerment, exports and inclusive growth” in the province.

“To ensure that all our economic and infrastructure plans are implemented with rigour and the required discipline of execution, I have decided to appoint the Premier’s Economic Advisory Panel made up of economic experts, entrepreneurs and labour representatives,” Gauteng Premier David Makhura said during his State of the Province address on Monday.

Gauteng will focus on fast-tracking the roll-out of infrastructure projects that have long been under way, including projects such as public transport and logistics; renewable energy and other energy sources; information and communication technology and broadband; and mega human-settlements, including government precincts to provide integrated service delivery; water and sanitation; health infrastructure; new schools; libraries and recreational facilities; and social development facilities.

The long-awaited human settlements and new cities initiatives will start this year with the implementation of the new mega human-settlements programme, the renewal of old townships and the conversion of hostels into family units and integrating them into communities.

There are 31 new mega human-settlements, in both public and private sector partnerships, that are scheduled to start in April in different development corridors, while the revitalisation and mainstreaming of the township economy is ongoing, with the GPG having increased spend from R600-million in 2014 to R6-billion in 2016.

RAIL EXPANSION
The feasibility study on the expansion and integration of the Gautrain is now completed, with the rail system to be extended to Mamelodi in Tshwane, Boksburg in Ekurhuleni, Randburg-Lanseria in Johannesburg, Mogale City and Syferfontein in the West Rand and Roodepoort/Jabulani over the next two decades.

The modernisation of rail infrastructure currently under way by the Passenger Rail Agency of South Africa in major parts of Sedibeng, Ekurhuleni, Tshwane, the West Rand and Johannesburg will result in the full integration of the Gautrain into the broader modern public transport system planned for the province once the two rail networks are ultimately linked.

In addition, Makhura noted that the GPG will mobilise its resources for public transport infrastructure in ways that would ensure that “we do not commit the same mistakes done with the e-tolls.”

“We cannot build roads and only later inform citizens that they must pay. In fact, there will be no e-tolls on our new roads,” he assured the province's citizens.

A rooftop solar photovoltiac project is also set to start, with 16 health facilities earmarked for installation.

Further, with some 1 500 km of network fibre, the connection of eight core sites and more than 800 access sites rolled out since 2014 to the Gauteng broadband network, GPG plans to connect more than 1 000 sites by March this year, in line with the targeted 3 000 sites by 2020.