Minister of health outlines plans for newborns under NHI

Minister of health outlines plans for newborns under NHI 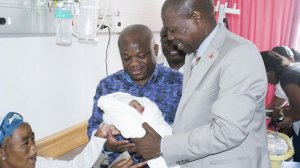 Health Minister Dr Zweli Mkhize has outlined his vision for turn-of-the-decade babies under the proposed National Health Insurance (NHI) during a visit to King Dinizulu Hospital’s post-natal ward, in KwaZulu-Natal and assured mothers of the new ease of obtaining their newborns’ birth certificates.

Mkhize exchanged gifts and presented the beaming mothers with their babies’ birth certificates.

“This will be the norm from here on, where mothers can walk out of hospital with the birth certificate in hand and not have to go to Home Affairs,” he assured them.

One of the mothers looking forward to a brighter future in health care was Khonelaphi Ngamu who gave birth to a healthy boy weighing 3.4 kg.

“I’m very happy today. I have given birth to my baby at 7.30 am and [Mkhize] and [Zikalala] brought my baby’s birth certificate when they visited a few hours later,” Ngcamu said.

“We are starting a new decade in which we will be instituting decisive actions in the implementation of NHI. When it is fully implemented, there will be no distinction between public and private hospitals. We believe that, incrementally, we are going to be seeing changes and improvements in the quality of healthcare,” said Mkhize.

Three regions in KwaZulu-Natal – Ugu, uMzinyathi and uMkhanyakude – have all met the targets, with 90% of people living with HIV knowing their status, 90% receiving sustained antiretroviral therapy and 90% of people being virally suppressed.

“Our message to South Africans is to encourage good, healthy living, particularly now when non-communicable diseases are on the rise. Individuals and communities are encouraged to take full responsibility for their health in partnership with the health care system,” said Mkhize.

Unilever South Africa and the Department of Small Business Development have partnered to increase investment in small-, medium-sized and microenterprise development. The partnership follows the publication of a racially offensive advert on the Clicks website by Unilever hair brand, TRESemmé. This resulted in protests by members of political party, the Economic Freedom Front, and forced Clicks stores across the country to close for several days. →