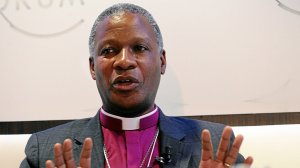 The Ahmed Kathrada Foundation will on Wednesday lead a public rally at St George's Cathedral, in Cape Town, calling for those who have looted the State to be brought to book.

In a public rally themed ‘Year of the Orange Overalls’, various formations of society and business are calling for President Cyril Ramaphosa to drive the point home during his State of the Nation Address on Thursday.

Archbishop Makgoba told Polity that 2020 must be declared the year of the orange jumpsuit because South Africans wanted to see politicians, and the business people who have influenced them to loot the State, being held accountable.

He said it was also important for government to give space to the National Prosecuting Authority (NPA) to do thorough investigations and urged South African not to put pressure on the NPA, as this may cause cases to be jeopardised due to hurried investigations.

He said he also hoped the Zondo commission of enquiry into State capture would not take another year to wrap up its activities.

“Can we have all those that nearly drove the country into unrecognisable poverty by stealing from the fiscus, can they be accountable. They only way they can be held accountable is if they wear orange overalls. Let us make this a year of action,” said Archbishop Makgoba.

He went as far as to say that even church leaders should be held accountable if they are found on the wrong side of the law.