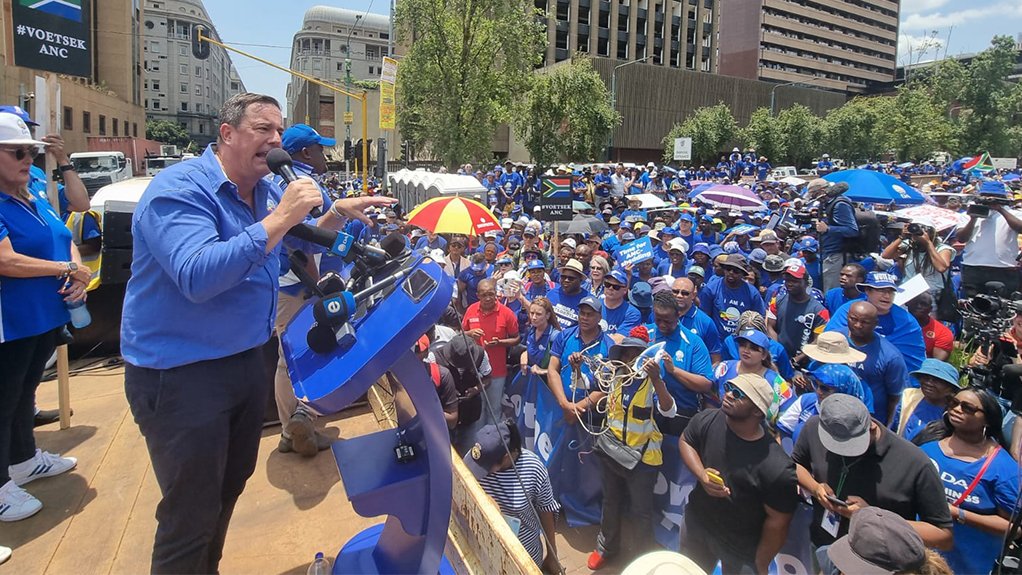 Opposition party leader John Steenhuisen said that a vote for the Democratic Alliance (DA) could ensure that power is reclaimed from the ruling African National Congress (ANC), who he blames for the country’s current energy crisis.

Steenhuisen addressed his supporters in the vicinity of Luthuli House during the DA's Power To The People march on Wednesday, which was organised to highlight the exacerbating energy crisis.

Steenhuisen reiterated that the root cause of where the country was stemmed from the energy deals that were struck at Luthuli House, as calls for President Cyril Ramaphosa to get rid of Gwede Mantashe gain momentum.

“Together we will beat crime, together we will beat unemployment, and together we will beat poor service delivery. But today’s challenge is the energy crisis, which threatens to derail not only our fragile economy, but our entire project South Africa. Because if we don’t solve this problem soon and end loadshedding for good, our society will start falling apart. Already we are close to breaking point, and communities across the country have run out of patience. We have to restore power to the people before the situation explodes into chaos,” said Steenhuisen.

He went on to criticise Public Works Minister Patricia de Lille for spending hundreds of thousands of rands worth of free diesel to run free generators, allegedly provided to all Cabinet Ministers instead of making sure that places like the hospitals and old age homes had power.

“And when the National Energy Regulator of South Africa (Nersa) says you must pay 19% more and then another 12% more, on top of 650% increase you’ve already paid these past 15 years, they don’t care. Because they don’t even pay for their electricity. You do, for all of it. So why would these Ministers feel any urgency to fix a situation that doesn’t affect them at all? And why would the people inside that building stop doing what they’ve been doing all these years when it’s been so rewarding for them?” Steenhuisen said to supporters.

He blamed the woes of Eskom on outdated policy, greed and corruption and cadre deployment.

Steenhuisen said the DA’s march was about taking back the power from a small elite that had insulated itself from poverty, crime and loadshedding.

He said the DA was marching on the ANC’s headquarters because the liberation party was to blame for the current energy crisis that the country found itself in.

“Every decision to delay the building of new power stations or to delay the procurement of electricity from other sources, every decision to put off station maintenance until things started falling apart, every corrupt contract issued to a connected crony, was either made inside that building, or by an ANC cadre deployed by a committee that sat inside that building,” he said.

He called on South Africans to make a change at the election polls in 2024 for a prosperous country.

He called it the “most important election any of you will ever vote in”.

“If we want to end loadshedding, we have to start ANC-shedding. And that will only happen if you remember on voting day exactly what they did to you. Don’t be fooled if they run the diesel turbines for weeks around elections to temporarily halt loadshedding. Don’t be fooled if Stage 6 suddenly becomes Stage 2. Remember them at their worst, because that is what it will undoubtedly return to if they are given another chance,” Steenhuisen stated.