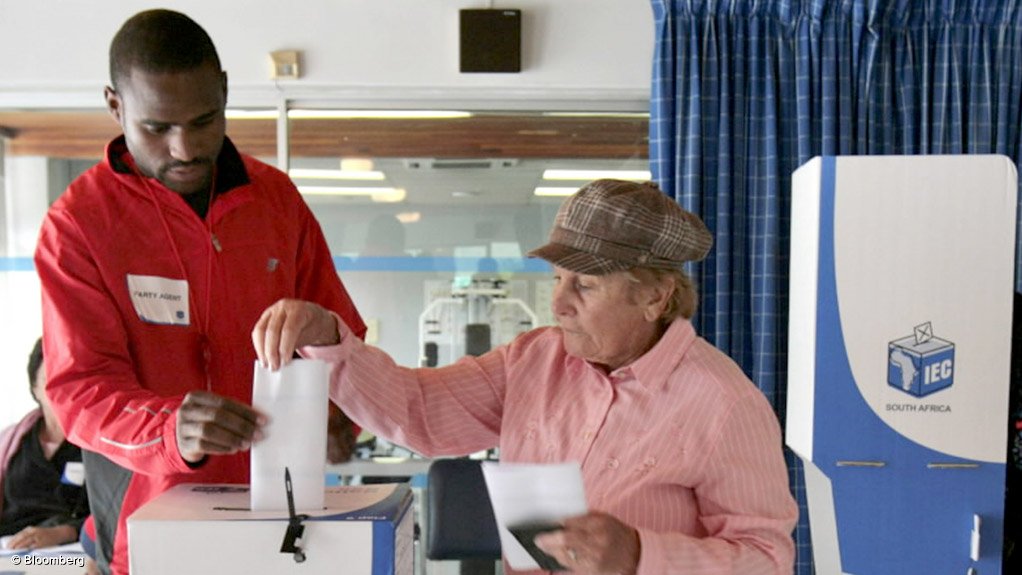 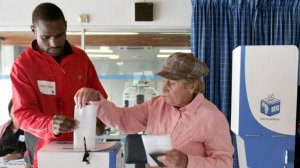 Members of the media, on behalf of the Ministers of the Justice, Crime Prevention and Security (JCPS) Cluster, we would like to thank the millions of South African voters for the dignified and respectful manner in which they conducted themselves during the 6th general elections which took place on the 8th of May 2019. During these elections we witnessed South Africans displaying active citizenship, patriotism and allegiance to our Constitution.
Many of the voters exercised tolerance and patience as they waited in long queues to exercise their democratic right to vote. As a country we have displayed that our democracy is indeed vibrant and allows everyone irrespective of race, colour, gender or religion to make their voice heard through voting.

As the JCPS Cluster we would like to confirm that all the 22 924 voting stations were secured on the day of the elections without major incidents, creating conditions for a free and fair elections conducted in a safe and secure environment.

The Intelligence Coordinating Committee (ICC) was established under the guidance of the National Intelligence Coordinating Committee (NICOC) for the National and Provincial Elections 2019 (NPE). Intelligence conducted threat assessments, and identified problematic areas on an ongoing basis. Both these aspects impacted on the risk rating of voting stations that was also reviewed on an ongoing basis. Although the problematic areas were fluid, depending on the circumstances at any given time, they remained located in specific clusters. Our success in ensuring stability in the country is as the result of the ongoing integrated effort of the NICOC.

A key concern was the situation in Vuwani with the threats by the Pro Makhado Demarcation Task Team (PMDTT) that no one would vote in the 2019 National and Provincial Elections. Although incidents were reported in Vuwani during the election with voting stations being closed and then reopened after IEC officials were given assurances that they would be protected, the electoral process was able to proceed. However, the element of intimidation remained.

A key mitigating factor was the arrest of the spokesman of the PMDTT on the eve of the elections. Mr Arnold Mulaudzi was arrested on charges of contravening Section 87(1)(a) par. 2 & 3 of the Electoral Act, appeared in the Vuwani Magistrate Court on Thursday, 09 May 2019. Mr Mulaudzi has been released on R5000 bail and is expected to reappear in court on the 03rd of June 2019. The case has been postponed to allow for further investigation.

Two people were arrested after a video was posted claiming that they have cast votes more than once. On the day of the elections, the 08th of May 2019, Etienne Mare (52) posted a video claiming that he was on his way to vote for a second time after hearing from Malinda Halloway (57) that she had been "able to do so herself".

Both suspects Mare and Halloway appeared on the 10th of May 2019 in the Barberton Magistrates Court on charges of contravening Section 88 (d) Voting more than once, Section 89 (i)(a) Intentional making a false statement, alternatively of fraud and Section 90(2)(a) Infringement of secrecy. Law enforcement agencies will leave no stone unturned in bringing the perpetrators to book.

The swift response in investigating and arresting all the suspects who alleged to have committed electoral fraud is commendable.

In relation to alleged multiple voting, a total of 8 cases and 24 arrests were noted.

Three National Intervention Teams were deployed to stabilise the hotspot area as identified by the Intelligence Coordinating Committee as follows:
• Limpopo deployed in Vuwani
• KwaZulu-Natal deployed in Nongoma and Vryheid
• North West deployed in Bloemhof and Brits

16 people were found guilty (1 case in KwaZulu-Natal in Mondlo on charges of defacing and unlawfully removing a billboard, Mr Sihle Mhlambi was handed a R2 000 fine or 2 months imprisonment; on the same charge in Mpumalanga Acornhoek, Mr Oupa Mohlala was handed a R300 fine). In the Eastern Cape Flagstaff 14 suspects were charged with public violence and sentenced to three months imprisonment.

On the day of the elections, Government deployed a total of 173 643 personnel and maintained a heightened police visibility in all nine provinces even after the announcement of the election results.

We would like to thank the members of the South African Police Service (SAPS) for going an extra mile in ensuring the creation of a safe and secure environment and protecting all voters as they exercised their democratic right. In the run up to the elections we announced that over 51 000 police officers and over 3 500 reservists were deployed in different voting stations around the country. Of all these deployed police officers and reservists conducted themselves with dignity and in a befitting manner which is consummate to their responsibility as law enforcement agents. SAPS also managed to contain the flaring of violence in the different priority areas (hotspots) especially in KwaZulu-Natal and North West as the Cluster identified prior to the elections.

Our appreciation also goes out to officials of the Department of Home Affairs who worked extended hours to ensure that South Africans who did not have their green Identity Documents, Smart IDs and Temporary Identity Certificates have access to these documents in order to exercise their democratic right to vote.

The Department of Home of Affairs assisted 154 000 to collect their IDs or to apply for Temporary Identity Certificates within the three days which the Department operated extended hours. The Department of Home Affairs also worked with local municipalities to issue more than 500 Temporary ID Certificates in places affected by floods in eThekwini Municipality and 255 in the OR Tambo Municipality in the Eastern Cape. In the Western Cape, 219 fire victims were issued with these documents covering Kayelitsha, Langa, Du Noon, Nyanga and Stellenbosch.

Over 15 000 registered inmates with relevant identification documents were allowed the vote in the National and Provincial Elections on 8 May 2019.  Since 1999, the Electoral Commission has worked closely with the Department of Correctional Services (DCS) to provide voter registration and voting opportunities for inmates. This is in line with the Constitutional right extended to prisoners to vote.

Arrangements put in place ensured that all registered inmates at our correctional facilities voted without any form of hinderance. Voting stations inside centres were safely secured and provided a conducive environment for electoral officials to run the elections.

As the JCPS Cluster we want to emphasize that we have zero tolerance to any form of criminal activity displayed by those who want to undermine our democratic processes. We will continue to act decisively to ensure that those people who are found guilty face the full might of the law. We want to reiterate that all citizens can be confident that all the law enforcement agencies will continue to act without fear or favour to ensure that the rule of law prevails in this country.

We also want to express our appreciation to the members of the South African National Defence Force (SANDF) for being a key role player in building the temporary bridges in various areas in the Eastern Cape which were affected by the recent floods to ensure that citizens in those affected communities were able to reach their voting stations which were cut off by the damaged infrastructure and will continue to access other services beyond the elections. The SANDF worked closely with the different Municipalities in KZN to ensure that the roads which were destroyed by floods were accessible for transporting the election material. The SANDF also assisted with the provision of water to the Inkosi Albert Luthuli Hospital in eThekweni.

The SANDF further deployed two companies to protect the two strategic installations in KwaZulu-Natal and a company was also deployed in North West to support the SAPS. Each of the remaining provinces had their company of SANDF on stand-by to assist should a need have arisen.

Sufficient training was rendered to the South African Police Service and the South African National Defence Force as a presiding officers. A total of 448 SANDF members and 903 SAPS members were trained as IEC Presiding Officers in all provinces should a need have arisen.

Lastly, we would like to thank the members of the international observer mission and the media for covering our sixth general elections in an unbiased and positive manner. Various media houses covered this important milestone in our country and showed that our people are committed to promoting democratic rule. As a country we will continue to be an example to all other countries who still don’t have democratic processes in place that it is possible to turn the tide around.

In conclusion, we would like to thank all stakeholders who worked together with us in ensuring that the 6th General Elections were conducted in a safe and secure environment. Without your tireless work of protecting our citizens we would not have succeeded in ensuring our citizens are and feel safe, as stipulated in the National Development Plan Vision 2030. Furthermore, as the JCPS cluster we extend our appreciation to all fellow South Africans for their cooperation during this pivotal period of our democracy.

The security cluster will continue to prepare for the inauguration of the sixth democratically elected President of the Republic of South Africa. As our democracy continues to flourish over the next few weeks leading to the 25th of May 2019, which coincides with Africa Day under the theme of the inauguration ceremony “Together celebrating 25 years of Freedom; renewal for a better South Africa”. Which affirms Government’s commitment to advancing the African agenda to strengthening ties between South Africa and its neighbours.

The South African National Defence Force's R200-million deal with Cuba that has seen the importation of an unregistered Covid-19 drug appears to be in jeopardy. Health regulators have given military bosses until Friday to provide evidence that the drug has been shipped back to Cuba, or face having it destroyed. On Wednesday, the South African Health Products Regulatory Authority and the Auditor-General briefed Parliament's Defence Committee on the investigation into the deal for the drug Heberon Alpha R 2B. Eyebrows were raised in April 2020 when the SANDF spent nearly R215-million on importing Heberon Alpha R 2B, manufactured by a Cuban-Chinese company. Interferons are proteins used in the body as part of its natural defence against viruses. →