Democracy thrives when there is space for dissent – Ramaphosa 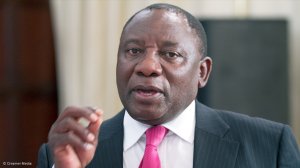 South African Deputy President Cyril Ramaphosa said on Thursday that democracy thrives when there is space for dissent, however, the manner in which dissent is expressed should not undermine the principles on which democratic order is built.

He was addressing delegates at the twentieth Electoral Institute for Sustainable Democracy in Africa (EISA) symposium, in Johannesburg, under the theme ‘Current democratic realities in Africa: where are we headed beyond the vote?’ .

Ramaphosa pointed out that an examination of recent political history of Africa revealed that democracy had made great progress.

“The increased number of competitive multiparty elections is one of the triumphs of the democratic trajectory of Africa,” he stated.

Ramaphosa said that democratic space had broadened on the African continent.

With the rise of popular multiparty democracy in the 1990s, the holding of regular elections had become the norm rather than the exception, he said.

Broad-based electoral democracies have supplanted the authoritarian and military regimes of previous decades.

Ramaphosa informed delegates that electoral democracies had contributed significantly to the stabilisation of the continent, and subsequent advances in economic growth and social development.

He added, however, that the deficiencies in the quality of some democracies raised concerns about the potential for a reversal.

“Electoral management bodies have delivered credible elections on our continent, including here in South Africa. Yet many countries still fall short in the administration of elections”.

He said democracy could not flourish where some people, particularly the poor, did not have access to the judicial system, did not benefit from the rule of law and were unable to exercise their rights.

Ramaphosa went on to say there was a need for greater transparency in the funding of political parties as well as the establishment of public funding mechanisms through which parties could be sustained.

On the issue of media freedom he said democracy could not flourish when the media was not free.

“There is good reason to be concerned not only with the measures governments might use to curb media freedom, but also with the unintended bias that the media’s commercial considerations often produce,” Ramaphosa stated.

He said as democracy on the continent developed, attention needed to be given to the management of disaffection and dissent.

“The right to peaceful protest, freedom of association and freedom of expression are fundamental pillars of a democratic society. Many countries, including South Africa, often struggle to manage the tension between the militant exercise of these rights and the maintenance of the rule of law and the protection of life and property,” Ramaphosa said.

“I am certain that an acceptable solution will be found and that, in the process, South Africa’s democratic values and practices will be further enhanced.”