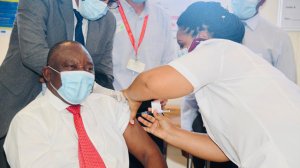 Ramaphosa and Mkhize were vaccinated at the Khayelitsha District Hospital, in the Western Cape.

They joined health workers in taking the vaccine to show government’s confidence in the vaccine and to allay fears from the general public.

The country has begun rolling out its vaccine programme to health works today as part of its phased approach to the inoculation programme.

CW head of stakeholder relations and campaigns Kavisha Pillay said this was in response to the many whistle-blower complaints received on police corruption.

The platform allows users to rate and review police stations based on personal experiences, to compare resources of up to four stations, to commend honest and ethical police officers, and to report incidents of corruption and police misconduct that are immediately geo-located through the tool.

It can be accessed at www.veza.org.za

Ebola outbreaks in Africa must be stopped, White House says

The Biden administration has said everything possible must be done to stop Ebola outbreaks in the African nations of Guinea and Democratic Republic of Congo before they become large epidemics.

Congo in central Africa on Sunday confirmed four cases since September 7 and Guinea in west Africa had seven confirmed cases and three deaths.