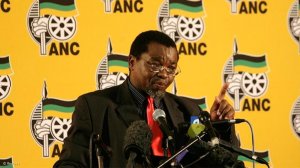 After more than seven hours of arguments the Constitutional Court has reserved judgment in an application brought by the Economic Freedom Fighters and other opposition parties trying to have President Jacob Zuma impeached.

The opposition parties told the court that they wanted the establishment of a fact-finding ad hoc committee that would force Zuma to answer questions about his conduct during the Nkandla debacle.

However, Hamilton Maenetje, representing National Assembly Speaker Baleka Mbete, said the Speaker's office would be acting inconsistently if it were to remove Zuma.

Hlaudi Motsoeneng due to appear in the Labour Court

Former South African Broadcasting Corporation COO Hlaudi Motsoeneng is expected to appear in the Johannesburg Labour Court today to explain why he should not be held personally liable for the wrongful dismissal of the SABC 8.

The eight journalists were fired by the public broadcaster in July 2016 for criticising Motsoeneng's policy against the airing of footage of violent protests.

Trade unions Solidarity and the Broadcasting, Electronic, Media and Allied Workers Union brought the matter against Motsoeneng, the SABC's former head of news Simon Tebele and the public broadcaster in March following the SABC 8's reinstatement.

Mantashe said he lodged a formal complaint in a telephonic conversation with his counterpart in Zimbabwe's ruling ZANU-PF for Mugabe to stop making "unwarranted and unfortunate attacks" on former president Nelson Mandela's legacy.

He is the first South African leader to chastise Mugabe for his reported comments.

The 93-year-old president is quoted as having said Mandela cherished his personal freedom over the economic freedom of his people, which is why in South Africa, "everything is in whites' hands".