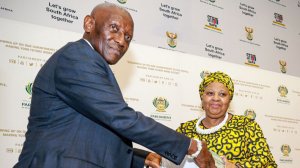 Ramaphosa says he receives 'no remuneration' from Phala Phala

President Cyril Ramaphosa told the panel established by Parliament to examine allegations relating to the Phala Phala saga that he never drew a salary, and that he had declared his financial interests at all times.

Ramaphosa, a prolific game breeder and businessman, divested from his business interests in 2012 after he became deputy president.

He held onto his two farms – Ntaba Nyoni in Mpumalanga, that he has owned since the early 2000s, and Phala Phala in Limpopo, that has been in operation since roughly 2010.

In his submissions he said he is entitled to retain assets or financial interests where no conflict of interest would arise, if these are declared.

On Wednesday the Section 89 inquiry panel handed over the report to Mapisa-Nqakula, which consists of three volumes.

The City of Johannesburg has shortlisted independent candidates to serve on the Financial Misconduct Board (FMB).

The FMB is the city's disciplinary board, renamed and reconstituted, to fight corruption and the theft of the city's resources.

The council adopted it on 27 May, and candidates were shortlisted on Monday after calls to the public, which closed on 18 August 2022.

Joburg Mayor Mpho Phalatse said the new board was a further step towards getting the body working "to root out the theft of city resources by city and entity officials working for self-gain".

The ANC and its alliance partners, the South African Communist Party and the Congress of South African Trade Unions have said that the parole granted to Chris Hani’s killer Janusz Waluś is a slap in the face to the country’s democracy.

The alliance partners picketed at the Kgosi Mampuru II prison, on Wednesday, ahead of Waluś's release.
Waluś was stabbed by a fellow inmate at the prison on Tuesday but is in a stable condition.

SACP general-secretary Solly Mapaila said it is also important that Waluś reveals who actually sent him to kill Comrade Hani.

The picketing also comes after Hani’s memorial site was vandalised.

The alliance partners said while this was a provocation they remained calm.