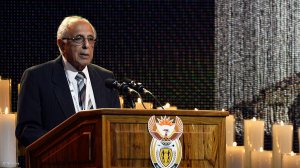 Struggle veteran Ahmed Kathrada to be laid to rest

Malema claims Gordhan will be fired after Kathrada’s funeral

The funeral of struggle veteran Ahmed Kathrada is underway today at the Westpark Cemetery in Randburg.

The 87 year old stalwart died in the early hours of yesterday morning after he had undergone surgery relating to a blood clot on the brain earlier this month, but experienced several post-operative complications and contracted pneumonia in both lungs.

President Jacob Zuma announced a state funeral for Kathrada and ordered that all South African flags fly at half-mast until Wednesday.

Pravin Gordhan and his deputy Mcebisi Jonas were ordered by President Jacob Zuma to return to the country from an investment roadshow in the UK on Monday, fuelling speculation that Gordhan will be replaced.

In a series of tweets, Malema said ANC secretary general Gwede Mantashe had already informed Gordhan of the president’s intention to replace him with former Eskom CEO Brian Molefe.


The Presidency today moved to explain why President Jacob Zuma’s lawyers were present at the high court in a matter in which finance minister, Pravin Gordhan, is seeking a declaration that he has no legal right to intervene in matters between banks and their clients.

The Presidency said the main applicant in the matter is the minister of finance but the President was cited as an interested party on the basis that he would be directly affected by the declaratory order that is sought by the 17th respondent, Standard Bank,” said the Presidency.

Professor Raymond Suttner unpacks his column 'Leadership in Question, part one: The leadership we have'. Click here to read the full column. →