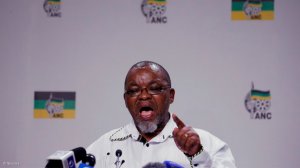 Gordhan to act against municipalities which owe Eskom money

And, Mantashe says stalwarts and ANC Women’s League could weaken the ANC

The Bills had been passed by both the National Assembly and National Council of Provinces in the past year and sent to the President for ratification.

Finance Minister Pravin Gordhan said National Treasury will act against municipalities that have failed to settle their debt to Eskom.

In a letter to the DA MP for the Free State David Ross, Gordhan raised his concern over Eskom’s planned power cuts on January 16, saying that National Treasury would consider withholding national grants to the non-paying municipalities.

Judge Hans Fabricius on Thursday ruled in the North Gauteng High Court that Eskom may cut off power supply to the eight indebted municipalities as a means to recover outstanding debt.

The ANC general secretary Gwede Mantashe has warned party stalwarts and the ANC Women’s League that they risk deepening divisions in the organisation.

Mantashe said the veterans’ intention of creating provincial chapters of stalwarts could further weaken the organisation as it would create a parallel process.

And, Lesufi and Makhura assured parents of around 40 000 pupils that their children would be placed in schools.