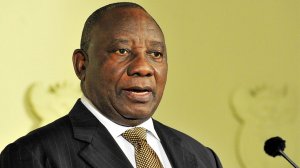 Making headlines: DA says new Cabinet undermines Ramaphosa's commitment to fight corruption; Zimbabwe elections to be held between 21 July and 22 August; And, Parliament to decide on expropriation without compensation

DA leader Mmusi Maimane said that last night saw the fatal compromise Ramaphosa made at Nasrec exposed for all to see, as Mabuza will be sworn in as the deputy president of South Africa.

Mabuza’s appointment as deputy president is a danger to the country, and flies in the face of Ramaphosa’s commitment to “turn the tide of corruption in the public institutions, said the DA leader.

He also said that Ramaphosa’s new cabinet illustrated that the problem in South Africa lay with the ANC itself. He added that the ministers who made up Ramaphosa’s "compromised and partially captured cabinet" showed that "it’s about the ANC and connected cadres first, and the interests of South Africa second".

Zimbabwe elections to be held between 21 July and 22 August

Zimbabwe will hold elections to choose a new president between 21 July and 22 August this year, the country’s electoral body has announced.

The polls will be Zimbabwe's first without the spectre of Robert Mugabe who was forced to resign in November after a military takeover, and late MDC-T leader Morgan Tsvangirai. The popular opposition leader succumbed to colon cancer earlier this month.

Zanu PF’s Emmerson Mnangagwa, who took over power from Mugabe will face-off against 40-year-old Nelson Chamisa, the MDC-T interim president.

And, Parliament to decide on expropriation without compensation

Today, the National Assembly will decide whether to proceed with a process to amend the Constitution to make expropriation of land without compensation possible, as the EFF's motion in this regard is expected to be debated.

The draft resolution, brought by EFF leader Julius Malema, states that "South Africa has a unique history of brutal dispossession of land from black people by the settler colonial white minority" and continues that this has left an "indelible mark on social, political and economic landscape of the country, and has helped create a society based on exploitation of black people and sustenance of white domination".

The EFF proposes that an ad hoc committee be established to review and amend section 25 to make it possible for the state to expropriate land in the public interest, without compensation.

Also making headlines:
The SACP today said President Cyril Ramaphosa "consulted" Tripartite Alliance partners of the ruling ANC, before he made his first Cabinet reshuffle that saw 10 ministers axed and others moved to new portfolios.


That’s a roundup of news making headlines today
To keep in touch with the news while you are on the move, visit m.polity.org.