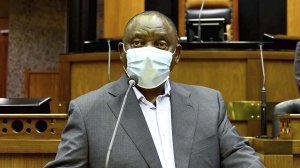 Opposition parties have slammed President Cyril Ramaphosa's State of the Nation Address as dull and out of touch with the country.

He delivered his fifth SoNA on Thursday and focused largely on economic recovery, and, as in previous years, spoke tough on corruption.

Democratic Alliance leader John Steenhuisen said Ramaphosa's SoNA was once again a series of unworkable plans rooted in the failed ideology of central command and control.

The Congress of South African Trade Unions has criticised government for its “continued lack” of progress and clarity to timeframes, procurement, logistics and other critical details of the country’s vaccine programme.

President Cyril Ramaphosa stated that the country has secured nine-million doses of the Johnson & Johnson vaccine, with 80 000 doses expected to arrive in the country next week. Further consignments will arrive over the next four weeks, totalling 500 000 J&J vaccines.

Cosatu said the country cannot afford to end the year without having reached the 70% population immunity level because the economy cannot sustain period shutdowns.

And, Sudan cracking down on ex-ruling party after violent protests

A committee tasked with dismantling the government of toppled former president Omar al-Bashir has issued a wide-ranging order to prosecute members of Sudan's ex-ruling party following days of violent protests across the country.

Posted early on Thursday, the decree directed state governors to take action through the public prosecutor against "all leaders of the dissolved National Congress Party, and its active cadres and the leaders of its facades".

Military generals ousted hardline Islamist Bashir in April 2019 and now rule in a fragile transitional arrangement with political parties that were part of the uprising against him.

Over the past few days, protests by Bashir-era loyalists have taken a violent turn in major cities across Sudan, with government buildings and vehicles set on fire and property pillaged.