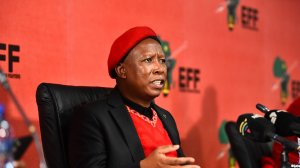 Department of Health deputy director-general Dr Nicholas Crisp said the latest data shows that about 267 000 people have been vaccinated over the past 24 hours, which he attributes to the early vaccination rollout to the 18 to 34 age group.

Phaahla said the country has adequate supply of the vaccines and that there is adequate capacity in terms of the physical infrastructure to administer the vaccines. This includes public and private facilities and the independent pharmacists who are assisting in administering vaccines.

The elections are scheduled for October 27. However, the Independent Electoral Commission has approached the Constitutional Court to have the local government elections postponed, saying that it is not possible to hold free and fair elections during the Covid-19 pandemic.

Malema said free and fair elections were primarily defined by the democratic right to freely and fairly campaign before voting day.

He said political parties must be allowed to convene political gatherings and engage members of the community.

The Democratic Alliance says that Gauteng hospitals have a high CEO turnover because the wrong people are chosen for the posts, and are then suspended or fired.

The party's health spokesperson in Gauteng, Jack Bloom, made the comment in reaction to provincial health department reports that eight out of 30 hospitals had acting CEOs.

The department said recruitment processes were under way to fill the top positions at 8 hospitals.

Bloom added that the high number of acting hospital CEOs is another failed promise by Gauteng Premier David Makhura who said two years ago that all hospitals would have permanent CEOs within six months.