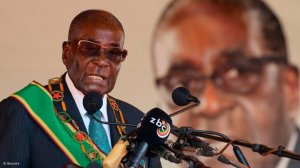 Grace was accused of assaulting a South African model Gabriella Engels and was pleading for diplomatic immunity.

Some Zimbabwean government sources said Mugabe could use the trip to try and help the situation surrounding his controversial wife Grace and kids – Robert Jr and Chatunga.

A visibly annoyed ANC KwaZulu-Natal chair Sihle Zikalala hit out at some of his party comrades following the first day of a case to have the provincial conference where he was elected in 2015 nullified.

He had strong words for his predecessor in the party, Senzo Mchunu, national executive committee member Bheki Cele, as well as deputy president Cyril Ramaphosa when he addressed some of his supporters outside the KwaZulu-Natal High Court in Pietermaritzburg on Wednesday.

Zikalala accused the ANC members who took the provincial executive committee to court of sharing information and colluding with those in the party who are "counter-revolutionary".

Treasurer-general of the ANC Zweli Mkhize has admitted that the party received donations from the Guptas.

Mkhize was presenting the ANC’s stance on party funding to the ad hoc committee investigating this matter when the Economic Freedom Fighter’s Marshall Dlamini said the Guptas footed the bill for the ANC’s 2012 conference in Mangaung.

He didn’t directly respond to Dlamini’s statement about the conference but he said it was a “tiny, insignificant amount that came to the ANC”.

Last month Mkhize presented the ANC’s submission to the media, calling for the regulation of private financing of political parties, financial transparency of political parties and "enhanced public funding for activities that promote and support democracy".