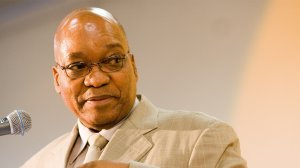 Zuma was part of the UN's high level panel on water and sanitation and was speaking at the World Water Day Summit in Durban.

Zuma said the panel would further commit to adopt a political declaration for the rollout by member states, in particular African countries.

Evidence presented in court did not conclusively prove that disgraced Hawks head Berning Ntlemeza was not fit to hold office, he argues in court papers.

Both Ntlemeza and Police Minister Nathi Nhleko on Monday filed applications for leave to appeal against Friday's ruling by the North Gauteng High Court in Pretoria that his appointment as Hawks head was unlawful and invalid.

She went over resolutions the ANC had taken since 1994 to improve access to education and the achievement of a progressively free education.

She called for a review of the current block-grant university funding, and funding for science and engineering students, and artisans to attract and retain young people in these fields.