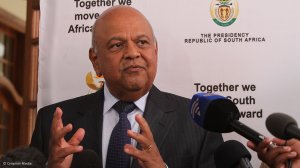 A Right2Know member has opened a case of assault after allegedly being slapped and manhandled by members of the police’s VIP protection unit, GroundUp reported.

Murray Hunter was placing one of the organisation’s “Stop SABC Censorship” campaign stickers on the bumper of a white, unmarked police car after the State of the Nation Address on Thursday evening.

Throughout the day, he and a few other people, had been going around Cape Town noting a number of unmarked police cars and increased VIP protection officers in the city for Sona.

Once the draft Prevention of Hate Crimes and Hate Speech Bill has been finalised and written into law, it will increase the workload of the National Prosecuting Authority.

The Act aims to guard against infringements on human rights, particularly racial discrimination and xenophobic intolerance, in terms of the Constitution.

The Director of Public Prosecutions in Pretoria, Sibongile Mzinyathi, was speaking to reporters at the SA Human Rights Commission yesterday during a two-day public hearing into racism and social media.

National Treasury cautioned the public and media on Wednesday about a “disinformation campaign” being waged before Finance minister Pravin Gordhan presents the country’s budget next week.

The warning was made in response to a press release sent to journalists by Edward Zuma, son of President Jacob Zuma, on Wednesday.

Zuma said the press release was in response to media reports on the same day about the South African Social Security Agency.

Sassa is in a crisis as it attempts to meet a deadline set by the Constitutional Court of 1 April to issue a new contract to a service provider to manage the country’s monthly grant payments to over 17 million citizens.