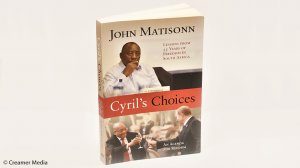 John Matisonn, author of the critically acclaimed GOD SPIES AND LIES, Finding South Africa’s future through its past, has written a tour de force review of South Africa’s first 25 years of freedom to provide a pathway out of its current stagnation.

President Cyril Ramaphosa, Nelson Mandela’s preferred successor, faces new problems and new choices since he won his own electoral mandate in May 2019. In the next five years, South Africa will be changed radically by the climate crisis, the Fourth Industrial Revolution, economic stagnation, political unrest among some of its southern African neighbours, and the rising African influence of Russia and China while the West is distracted by the insurgent populism of US President Donald Trump and Brexit.

CYRIL’S CHOICES: Lessons from 25 years of freedom spells out the choices before Ramaphosa and South Africa.

For the first time, Matisonn explains work he began at the time he met Nelson Mandela a day after the future president left prison. In September, 1991 he resigned his job as a foreign correspondent in South Africa to study the problem first at the University of Chicago, then in Japan and Russia.

Drawing on experience from Moscow and Kyoto, Harare and Bangui, and the highways and byways of South Africa, the author shows that rapid growth and job creation are a policy choice that can be made by changing how we identify drivers of rapid South African growth.

Since his study visit to Russia in 1992, the author has traced the rise of the Russian oligarchs who befriended President Zuma and other African leaders to sell nuclear plants and take over mines, and how the immigrant Indian Gupta family became South Africa’s own oligarchs.

Since Japan’s was the most successful economic transformation in history before China, and the first so-called “developmental state,” Japan provides guidance as South Africa sets a new course.

Cyril’s Choice is a sometimes humorous but searingly frank portrayal of where we went wrong. It offers clear answers to a South Africa in search of hope: we must learn from others as we develop our own unique African success story, if we are again to provide a beacon of respect and success on the African continent.

South African voters are getting impatient with all the major parties. Without decisive progress, the ruling African National Congress and the official opposition Democratic Alliance are at risk of being overtaken by new forces we cannot yet see. What do they need to change to reverse public disillusionment? And what will replace them if they don’t?

We can’t change the past, but we can draw on strengths we’ve shown we have in order to change the future.

For his latest work, John Matisonn draws on more than 40 years in journalism, government and the United Nations. Now he connects the dots like nobody else can.

John Matisonn is a South African political journalist and author. He was one of the founding councilors of South Africa’s Independent Broadcasting Authority and from 1986 to 1991 was the South Africa correspondent for National Public Radio in the United States.

Cyril’s Choices: An Agenda for Reform is published by Missing Ink