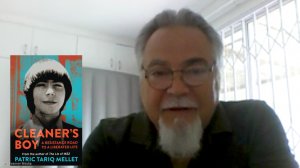 Questions of identity were unavoidable in Patric Tariq Mellet’s life. As a small child he watched as his immediate family were mistreated, arbitrarily classified and separated through apartheid laws. He endured a turbulent childhood, shuttled between foster families responding to his mom’s plea for ‘a home for a well-behaved Catholic boy’ and surviving Dickensian conditions in the ‘Huis’, a hellish children’s asylum in Vredehoek. Despite deception about his birth father, Patric found a path towards his roots and a sense of self, which sparked the fire of resistance in the young Cleaner’s Boy – a term of endearment that referred to his mother.

Patric Mellet’s autobiography demonstrates a spirit of unbridled defiance. In small and major ways, he liberated himself from an unpromising and tragic early life to a life of undoubtable impact and influence. A freedom fighter, a mystic and always a firebrand.

Patric Tariq Mellet was born and raised in the Salt River, Woodstock and District Six districts of Cape Town. He is a former liberation movement cadre, who returned from exile in 1990. In 2019 the Minister of Sport, Arts and Culture appointed him to the Governance Council of the South African Heritage Resources Agency.

'Cleaner's Boy: A resistance road to a liberated life' is published by Tafelberg, an imprint of NB Publishers