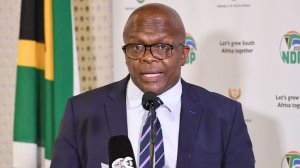 Minister in the Presidency Mondli Gungubele said Cabinet approved the 100m flagpole at Freedom Park in Pretoria in February as a project that would "bring South Africans together".

"It was not meant to tear us apart," the minister told News24 after the arts and culture department announced it would review the project, following public outrage.

When Cabinet approved the project, there was no determination on the cost of it, Gungubele said.

"The financial issues were to be separate. Cabinet was not involved with that," he added.

Minister of Sport, Arts and Culture Nathi Mthethwa has since "directed his department to review the process related to the monumental flag in its totality", a department statement indicated.

He added, "We will await the minister's explanation."

Meanwhile, Parliament's Portfolio Committee on Sports said the department reported that R1.7-million was spent on geotechnical studies so far.

"The committee was briefed on the concept on Tuesday, when the project was punted for its contribution [to] job creation and diversifying the South African heritage landscape; things which the committee noted," chairperson Beauty Dlulane said.

Dlulane added that the committee did not have an issue with the intention and motivation behind the concept and that figures were still to be presented in more detail to it.

"But the committee is happy that the department has listened to the public sentiment and thus committed to rethink the concept and the figures involved."

Angolans head to the polls next week in what is likely to be a tense standoff between a ruling party in power for nearly five decades and an opposition with growing appeal to a frustrated, impoverished youth. The MPLA, led by João Lourenço since 2017, has governed Africa's second-biggest oil producer since independence from Portugal in 1975. But longtime opposition party UNITA is stronger than ever, as anger grows at government failures to convert vast oil wealth into better living conditions for all. Angola, one of the world's most unequal nations, will on August 24 elect a new president and lawmakers in its fifth multi-party election since the first in 1992. Half of Angolans live in poverty and more than half of those under 25 are unemployed, facts which UNITA hopes to capitalise on in promising a change of regime. Half of voters are under 35. →