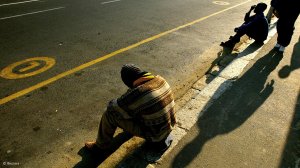 The latest iteration of the R350 grant, which was supposed to run from April to the end of March next year, put in place a means test of R350, meaning that anyone who has income above that level – even if it is support from a family member – is excluded from the grant. Previous versions of the grant did not require a means test.

In a statement on Thursday, the Black Sash – which is supported by several other civil society organisations – said it had approached the North Gauteng High Court in Pretoria to have the regulations set aside. The Black Sash will be represented by the Centre for Applied Legal Studies.

"The South African Constitution guarantees the right to social assistance for those unable to support themselves and their dependents. Millions of people in South Africa are in this position through no fault of their own but because of an unequal and exclusionary economy. We believe this constitutional right will prevail, and the courts will uphold it," the Black Sash said.

The civil society organisations argue that the means test is arbitrary and excludes large numbers of desperately poor people. SA's food poverty line – which is the amount of money needed to sustain an individual for a month – is R624 a month. According to Stats SA, 18.3-million people live below this line. By setting a means test, the government hopes to limit the number of people eligible for the grant to 10.5-million.

"There can be no justification for only 10.5-million people receiving the SRD grant," they said in a statement on Thursday.

They are also challenging the exclusive online application system.

The decision by the Department of Social Development to implement a means test delayed the payment of grants for April and May. The first grants were paid last week, but beneficiaries did not receive back pay as promised by President Cyril Ramaphosa and Minister of Social Development Lindiwe Zulu.

The organisations – including the Institute for Economic Justice, the Centre for Applied Legal Studies, #Pay the Grants, SPI and Amandla.mobi – have waged a long-standing campaign for a universal basic income grant. Despite a positive engagement with Ramaphosa in January, government has failed to consult with civil organisations on a permanent grant.

The grant should come into effect immediately following the end of the SRD grant in March 2023, they say. It should be set at a minimum level of the food poverty line and rise over time to eliminate poverty.

The National Treasury is investigating the feasibility of an income grant.