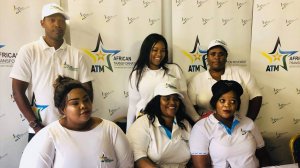 Former Eastern Cape African National Congress (ANC) Transport, Roads and Public Works MEC Thandiswa Marawu on Thursday expressed her delight in being able to represent the new kids on the block, the African Transformation Party (ATM) in the National Assembly during the term of the sixth administration.

Marawu joined the ATM in March and was selected to serve as an MP along with the party leader, Vuyolwethu Zungula. The ATM scooped two seats in the National Assembly following the May 8 elections.

Marawu spoke exclusively to Polity and said that she did not take lightly the task at hand, which was to present the party’s policies.

She said the ATM leadership would provide guidance as to which parties to work with to advance the ATM’s policies.

Marawu dismissed allegations that she joined the ATM to climb the political ladder.

“It was not about joining a smaller party. The ATM is not small at all, I must register that. The spiritual father of the ATM is my chief Apostle, so there is no way that I was pushed because of its numbers but it was because of the ideologies of my church,” she explained.

When asked about the key issues that she would be debating in Parliament Marawu told Polity that the amendment of Section 25 which deals with land expropriation were of vital importance.

“That is very key. If that amendment can pass, women can benefit a lot,” she said.

Marawu also said it was important to address economic policy issues. She said the laws that governed the country were the clear cause of the high rate of unemployment.

The South African unemployment rate is currently standing at 27.6% according to Statistics South Africa’s most recent Quarterly Labour Force Survey.

She advised that the country’s high unemployment rate could be resolved by processing raw materials in the country.

“Don’t export everything from South Africa. That is a problem we are encountering, that is why there are no jobs that are created because [of] our economic policies that are entrenched in our Constitution.”

Rural infrastructure was also a key focus area, which Marawu said could lead to fixing hospitals, roads and schools in the rural areas and addressing the lack of business sector development at a lower level.

The ATM will not participate in the National Assembly as an opposition party. Marawu said it would not make sense to oppose policies for the sake of fulfilling the mandate of being an opposition party on things that could benefit South Africans. She said the ATM was a peace party.

Marawu said her party would push the issue of capital punishment in Parliament as there was significant crime perpetrated against women. She said support for capital punishment would not be on blanket approach basis but would apply to serial killers.

When asked about the previous cloud of maladministration that hung over her while she was an MEC in the Eastern Cape, Marawu said she was guided by peace as an ATM member.

“There is no way that you can have pure government when you do not have peace with yourself. Our bible in Parliament will be peace, Ubuntu and putting South Africans first,” she said.

She also denied that the party had ties with former President Jacob Zuma and ANC secretary general Ace Magashule.

“If a small party is a threat there will be some negativity. If you are associated with Zuma, there is a stigma. Every means that will have negative impact for your party’s performance is part of psychological warfare for people’s mind not to trust the ATM, otherwise there is totally no association with the former President. The former President was busy campaigning for the ANC,” she added.

When asked to comment about the results of the ATM during the elections, she told Polity that it was God’s will but she said the Independent Electoral Commission of South Africa would have to look at introducing biometrical systems to make sure that everyone was satisfied with the voting process.

By: Reuters    Updated 5 minutes ago