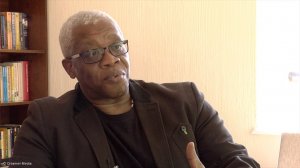 Almost a year ago, Cyril Ramaphosa was elected president of the African National Congress (ANC) at the Nasrec national conference of the ruling party. Two months later, he became the President of the republic. His election was greeted with a great sense of euphoria, optimism and hope. The end of former President Jacob Zuma’s darkness at noon was declared a new dawn by Ramaphosa and his disciples inside and outside the ruling party.

While Ramaphosa has the subjective interest of positioning himself as the antidote to Zuma’s ignominious reign, and while he is seen as an embodiment of both his new dawn and new order, objectively, the expectation that Ramaphosa should, somehow, have turned Zuma’s solar eclipse into a new dawn in the short period prior to the 2019 general election was always going to be unrealistic – both because of objective factors beyond his control and his subjective weaknesses as a leader.

Ramaphosa’s main challenge is not outside the ANC. The main challenge is internal opposition inside the ruling party, and the internal balance of support is such that the President remains constrained in his capacity to make critical decisions without the consent of his opponents in the Zuma faction. The possibility is that he will be a lame-duck President if he does not seize the day by identifying and exploiting opportunities within the constraints presented by the balance of forces in his party.

When it comes to the deployment of the criminal justice system to tackle corruption, attempts to clean up State-owned enterprises, especially an Eskom that has become one of the main threats to the South African economy, as well as attempts to provide leadership in the project of attracting international and domestic investment into our economy, Ramaphosa must be lauded. That said, his economic stimulus package, which is aimed at kick-starting gross domestic product growth in the economy, is less than inspiring. It amounts to a rehashing of oft-repeated policy measures that the ANC government has failed to implement. A good example in this regard is the promise of injecting R400-billion into the economy over the next three years for infrastructure development.

There is an extent to which Ramaphosa is not entirely to blame for the lack of policy coherence when it comes to the imperative of tackling inequality, poverty and unemployment. While rent-seeking, corruption and State capture had become a significant component of the dominant culture of poor governance in the State, there are two things the President must always remember, namely the fact that inequality, not corruption, is the main challenge facing South Africa and the fact that turning around the performance of both the State and the economy must be a function of the collective wisdom of South Africans across the political, ideological, social and class divide. This must be a critical realisation because of the problem of poor thought leadership at a collective level which coincides with outstanding examples of thought leadership at an individual level. The challenge, therefore, is to bridge the gap between collective and individual wisdom. For this to happen, key economic actors must realise that the maximisation of narrow interests will deliver mutual destruction, the further destruction of value and, as a consequence, a deeper crisis in the economy.

Without any shadow of doubt, the passing of Winnie Madikizela-Mandela earlier this year amounts to the end of an era and the beginning of another in the struggle against patriarchal oppression. In my view, something shifted during the ten days of mourning which preceded her funeral. In how young women mourned her death, it became clear, at least to me, that the centuries of oppression that their fore-mothers suffered have become cycles of humiliation and dehumanisation that have not only been passed on from generation to generation, but have also become embedded in the consciousness of women of generations young and old. The anger of these young women highlighted two things. First, it resensitised me to the ways in which I, as a man, have let women down. Second, it reminded me of the fact that humanity will never reach its full potential until women are fully human.

As we come to the end of the year, the popular imagination is being excited by the testimony of people such as Pravin Gordhan to the Zondo commission of inquiry into State capture. The demise of former Finance Minister Nhlanhla Nene after his own testimony has served to reinforce my view that the protagonists in the State capture political drama come in two variations – angels with horns and devils with haloes. What the protagonists in this saga seem to have forgotten is the sage advice from China, according to which it is always prudent for one to dig two graves when one goes to battle.