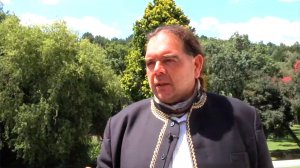 In this video, RiskRecon director Dr Petrus de Kock discusses the risks South Africa might face if a coalition government were to dethrone the ANC at the next general election. Camerawork: Kutlwano Matala. Editing: Nicholas Boyd. Recorded: 02.02.2022

If a national coalition between opposition parties were to unseat the ruling African National Congress (ANC) in a future general election, it could result in a paralysed Parliament, which would be a “nightmare scenario” for the future stability of South Africa, executive consulting firm RiskRecon director Dr Petrus de Kock said at the launch of RiskRecon in Johannesburg on February 2.

Coalitions between opposition parties, such as the Democratic Alliance and the Economic Freedom Fighters, dethroned the ANC in the municipal elections in November last year in several key metropolitan municipalities across South Africa.

De Kock said dwindling support for the ANC after decades of corruption, mismanagement of public resources and widespread service delivery failure was increasingly pointing towards the ANC’s share of the vote dipping below 50% at the next general election, thereby opening the door for opposition parties to band together to unseat the ruling party.

The ANC has ruled South Africa with a more than 50% majority since 1994. In the nearly 30 years of ANC rule, the country has shown ever-increasing signs of State failure and State collapse – particularly in the past decade.

However, De Kock noted that councils had been prevented from carrying out their duties towards the public, and running their districts, owing to party disputes, disruptions, filibustering and sabotage taking place in council chambers. This has led to service delivery interruptions and paralysis in metros rather than improvements.

“If the South African State is to fail, the first signs will present themselves in local government,” added RiskRecon director Dr Kingsley Makhubela.

De Kock noted that State failure and State collapse was not a singular outcome but rather a spectrum along which South Africa has been progressing. He explained that one of the most obvious signs of State failure was the failure of local government to deliver its mandate to citizens.

He said that, in the latest Auditor-General report on South African municipalities, only 16 out of 257 were declared “stable”. Further, only 27 received clean audits.

Another sign of State failure reaching dangerous levels is the emergence of "extractive institutions aimed at enriching predatory elites".

Rampant corruption within State-owned entities such as Eskom, Transnet and the Passenger Rail Agency of South Africa, besides others, are clear signs of this taking place.

He said State collapse can occur when the democratic process fails.

“South Africans are losing faith in the democratic process, which is a red alert,” De Kock said, noting that about 68% of registered voters did not vote in municipal elections last year owing to a widespread belief that their votes would not make any difference.

He said that when citizens stop believing in democracy, it opens the door for other kinds of politics to enter, some of which could be violent.

De Kock said the problem with South Africa’s democracy was with the electoral system, which was inherently flawed, requiring citizens to vote for a political party and not have any say over individual candidates.

This put the power in the hands of political parties to internally select officials. Moreover, internal party politics was often self-serving and not necessarily in the best interests of the wider public, leading to inept officials being put in positions of power and influence.

RiskRecon launched a report titled 'The South African case: local government failure as first stage of state collapse' at the event in conjunction with the launch of the company.

De Kock said the hope was that the research and insights in the report, as well as further work in analysing and consulting for the private and public sectors, would help turn the tide of South Africa’s trajectory towards State failure by addressing the problems at the local government level.