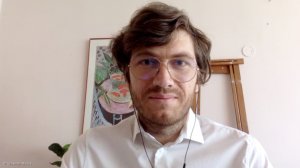 Originally the Venda Building Society, VBS Mutual Bank was a small, little-known lender in Limpopo before it rocketed from obscurity in 2016 by giving President Jacob Zuma a controversial home loan to repay the state for improvements to his Nkandla homestead. The bank was growing rapidly and sold itself as a fearless champion of black advancement. Its owner, Vele Investments, was on a meteoritic trajectory towards becoming a financial conglomerate worthy of national attention.

When the bank abruptly went into curatorship in March 2018, no one had any reason to doubt that it was just another unfortunate corporate failure. Then the astonishing truth emerged: the collapse of VBS was due to an epic R2-billion fraud that had created Vele’s empire out of thin air and left the bank a hollow shell.

VBS: A Dream Defrauded  unravels the fraud, exploring how suspected mastermind Tshifhiwa Matodzi and his associates first took control of VBS, fed ANC patronage networks and operated under a nationalist mantle endorsed by Venda royalty. The book explains how the bank and its shareholder Vele were seemingly built into a multibillion-rand business, exposes the political machinations that guaranteed VBS up to R3.5-billion in unlawful funding from municipalities and other state institutions, and describes the free-for-all that ensued after the bank’s collapse, when all involved tried to cover their tracks.

Written by one of the journalists who first broke the story, this book draws on interviews with VBS insiders and other role-players, as well as documents and detailed forensic evidence collected in the course of two years of investigations. This is a compelling account of a bank heist whose shockwaves continue to haunt the politicians, businessmen and traditional leaders who enabled it.

Dewald van Rensburg is an award-winning journalist with fourteen years of experience in business, economic and investigative reporting, much of it at City Press. He originally broke the story of VBS's defrauding alongside his colleague Sipho Masondo at City Press and was subsequently responsible for many exposés around the bank's demise. His work on the bank's collapse won him the coveted Sikuvile journalism awards for Investigation of the Year, Story of the Year and Journalist of the Year in 2019. Dewald currently works at the amaBhungane Centre for Investigative Journalism and continues to focus on malfeasance in the private sector.