The promise of ’94 not fulfilled – Salga president

The promise of ’94 not fulfilled – Salga president 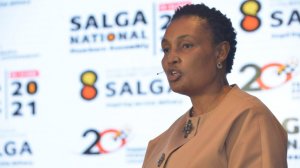 South African Local Government Association (Salga) president Thembisile Nkadimeng says that while South Africa has made great strides towards realising people’s rights to a better life and towards advancing human dignity, upon honest reflection, the promise of 1994 has not yet been fulfilled in many parts of the country.

She was addressing delegates, on Thursday, at the two-day Salga National Members Assembly under the theme ‘Guiding the Transition: An opportunity to renew as we usher in the 5th Term of Democratic and People-Centred Local Government’.

“We must, however, as local government, take a moment to reflect on the commitments made by former President Nelson Mandela, on that very fateful day when he said that ‘Our message is that the basic needs of the masses of the people must be addressed: the creation of jobs, houses, the introduction of electricity, building of schools and hospitals, providing free, compulsory quality education, running water, paved roads’”, she said.

She said as delegates reflected on the fourth term of office of local government they must capture the moment as an opportunity to renew and recommit themselves to the 1994 promise.

She shared that many communities were angry about failed service delivery and said it was imperative to check the pulse of the communities to see where local government is failing.

"What we come across within communities is a call for Salga to extend its call for existence. As Salga we have received 8 clean audits, uninterrupted and we want to extend our expertise to municipalities," she said.

She commended many councillors who have provided for destitute families during the coronavirus (Covid-19) pandemic and also thanked the Canadian government for its assistance.

Meanwhile, former executive mayor of Johannesburg and Salga chairperson Amos Masondo raised concerns on the growing number of “not so great interventions” made by municipalities.

He said of great concern was an increase in the number of repeat interventions that were used as an instrument to achieve political ends.

He stressed many of the issues that trigger an intervention in local government can be avoided only if the spheres of government work in good faith as outlined in the Constitution.

“Our concern is that this failure in advancing these constitutional principles might suggest a tendency to simply want to take over the powers of local government,” he added.

He said local government processes have become a game changer in leveraging development in some of the traditional black areas and have resulted in the building of some world class facilities in townships, infrastructure programmes and the general rehabilitation of the environment.

Masondo said such developments helped to change the face of many cities and towns around the country but admitted that while development took shape in many parts of the country, degeneration also set in.

“In addition to placing local government at the center of social and economic development, the Constitution also advances the principles of cooperative government and intergovernmental relations amongst other things,” he said.