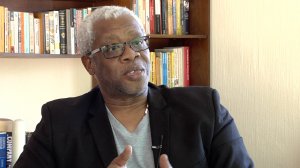 In my last interview with polity.org, I argued that there is an Askari element in the African National Congress (ANC). This Askari element consists of members and leaders of the ANC who, since the days of the liberation struggle, have been part of the project to destroy the ANC and, thereby, prevent the coming into being of a postapartheid society that is the antithesis of our colonial and apartheid past.

I invoked this Askari element as part of an attempt to provide a multidimensional explanation for what is popularly, and maybe dishonestly, referred to as State capture. In other words, I am trying to interest the reader in what I believe should be a much broader conception of the phenomenon and tendency of State capture.

Before I proceed, there are eight things we need to remember about any form of representational or political discourse. First, the content of our political discourse is socially constructed and populated by a contest between different and conflicting subjective interests at the personal and collective levels.

Second, political reality is created by both the truth and lies.

Third, the best lies are those which contain some truth. In other words, the truth makes a lie more potent.

Fourth, and I will keep on repeating this until the different political and economic actors abandon the idea that we are blind to the trickery of their rhetorical devices, the manipulation of perception and the manipulation of State institutions, politicians and the political commentariat in its various incarnations. This side of heaven and hell, political battles, and economic battles disguised as political battles, are almost always between angels with horns and devils with haloes, and what they have in common is a God complex. However, the most dangerous creatures, those that roam both the political and economic jungles, are the devils who parade themselves as angels. What makes them even more dangerous are the dogs of embedded journalism and political commentary and the high levels of legal populism and self-inflicted gullibility that go with it.

Fifth, the State capture discourse and reality, as well as the legal and quasilegal processes it has spawned, are part of a battle for mindshare in which all sides of the factional divide have, to some extent, succeeded in looting our hearts and minds. As a consequence, instruments such as the State capture and South African Revenue Service commissions of allegations, because of no fault of the judiciary, have become an integral part of this battle for mindshare, as well as extensions of the court of public opinion.

Sixth, the angels with horns, devils with haloes and the devils who pretend to be angels have used their divine powers to create primary definers who fight their cause in social and traditional media.

Seventh, all these creatures are trying to impose a canon of rational opinion on us – their cheerleaders.

Eighth, when it comes to the imposition of narrow conceptions of State capture, there are questions you dare not ask if you are desperate to escape the emotional blackmail of being accused of supporting corruption. For instance, when it comes to the allegation that some leaders of the ANC tried to influence some of our angelic banks to reopen the Gupta accounts they closed to avoid reputational damage, you can, to the sound of supportive applause, ask whether the ANC leaders in question are agents of State capture. But it is imprudent in the extreme to ask whether any leader or leaders of the ANC asked our angelic banks to close the accounts of the demonic Guptas. Also, you must not ask whether our banks closed the bank accounts of the apartheid government, the National Party, PW Botha, FW de Klerk, Brett Kebble, Glenn Agliotti, Prince Mangosuthu Buthelezi and Jacob Zuma, against whom many an allegation was made, to avoid reputational damage. These banks closed the bank accounts of the Guptas to avoid many things. Reputational damage was not one of them.

State capture (including the self- serving narrow definitions thereof), endemic and systemic corruption in the private and public sectors, rent-seeking and the wanton looting of State resources, as well as the wanton destruction of State institutions, are painful realities of our postapartheid order. The last thing we need is selective perception and morality because, as one lawyer put it, we run the risk of punishing those who stole our wallets while the crooks who steal the safe by manipulating and distorting public policy are deified and worshipped as paragons of virtue.

Back to the Askari element: I think it is more appropriate to talk about the Askari impulse – an impulse that, since before 1994, has been causing our leaders to sell South Africa and its resources to the highest bidders locally and internationally.