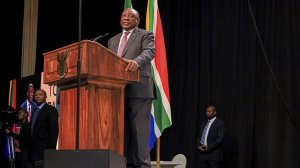 President Cyril Ramaphosa announced on Friday that government, represented by the South African Police Service (Saps) and the Department of Mineral Resources and Energy, will convene an Imbizo with the Kagiso community over the weekend to interrogate issues of illegal mining and crime in Krugersdorp.

Last week a group of men and women shooting a music video at a disused mine near Krugersdorp were attacked by armed assailants who gang raped eight of the women.

Ramaphosa was speaking during the second day of the Presidential Social Sector Summit, held in Johannesburg, where he said South Africa’s society is confronted by lawlessness, crime and corruption, gender-based violence (GBV), hunger and malnutrition.

Ramaphosa said police were hard at work with investigations, however, while he commended them for apprehending suspected illegal miners and shutting down their operations, he said the police must double their efforts in catching those responsible for gang raping the women.

“This horrific crime is a reminder that as government and society we must do more to tackle gender-based violence. Over the last few years, as a result of cooperation between government and society, we have strengthened the response of the criminal justice system to such crimes,” he said.

As part of the National Strategic Plan against GBV and Femicide government has enacted new legislation focused on the capacity of the Saps, the National Prosecuting Authority and courts to better support GBV survivors and prosecute offenders.

“We know that the NPA continues to place special emphasis on prosecuting these crimes, obtaining a conviction rate of 74%. We want to encourage the NPA and the police to do more in their common efforts in the fight against gender-based violence and femicide,” said Ramaphosa.

In his message of support, Odusola said the United Nations was ready to work with the South African government and civil society in dealing with violence.

Ramaphosa pointed out that over the past week the country had witnessed scenes of violent protest, damage to public infrastructure and, in some cases, loss of life in areas such as Kagiso in the West Rand and Tembisa in Ekurhuleni.

“As we address these incidents we need to distinguish between legitimate protest and criminality, addressing the concerns and grievances of communities, while acting to prevent loss of life and destruction of property. We can all understand the public outrage in Kagiso at the gang rape of eight young women last week and we all deeply and sincerely share in the pain of the victims, their families and the neighbouring communities,” said Ramaphosa.

ALL HANDS ON DECK

Ramaphosa said that to overcome the challenges facing the country, it required all sectors of society to bring their respective capabilities together and unite behind a common vision.

“Civil society organisations are where our people are, whether as NGOs, as community, professional and faith-based organisations, as academia or as worker representative organisations. One of the priorities of this administration is to drive people-centred, localised development through the District Development Model. It seeks to promote an approach to development that takes into account needs, circumstances and priorities on the ground,” he said.

Now more than ever government relies on civil society’s knowledge, experience and expertise to guide government on what interventions are needed, and to point out the best way to allocate scarce resources, Ramaphosa added.

He noted that civil society reaches where business and government often cannot, adding that it had a solid track record of organic interventions and activations that yielded results.

He said this summit was crucial for government and civil society to align its efforts and actions.

“Our most pressing priority right now is recovery from the pandemic. We are hard at work implementing the Economic Reconstruction and Recovery Plan to grow our economy and create jobs. It is only through a stronger economy that we will be able to lift millions out of poverty, expand the rollout of comprehensive social support, improve the delivery of services and create employment so people can lead lives of dignity,” he explained.

The strategic role of platinum group metals (PGMs) in the creation of a hydrogen economy is the key supporting element of the Just Energy Transition Investment Plan (JET-IP) unveiled by President Cyril Ramaphosa at the 2022 United Nations Climate Change Conference, Mapungubwe Institute for Strategic Reflection researcher Dr Nqobile Xaba emphasises in an op-ed. However, given the criticality of PGMs in achieving global net-zero emission targets, Xaba questions the sufficiency of South Africa’s gearing to leverage off its PGMs endowment. →