SA: Statement by the Sidikiwe! Vukani – Vote No Campaign, calls on South Africans to endorse campaign (16/04/2014) 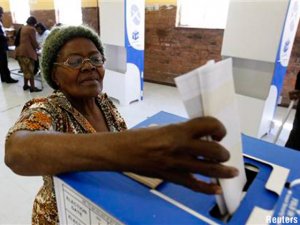 We are South Africans who played a part in the struggle against apartheid and
who have contributed to the building of a democratic South Africa. We want
a just, fair and egalitarian society as promised in the Freedom Charter and
clarified in the Constitution and the Bill of Rights.

It is a profound tragedy that these ideals and prospects are being sacrificed on
the altar of self-enrichment and power mongering. Corruption, cronyism,
control over the public debate have spread like a cancer through the ANC
and, because of this, through government and state institutions. This has
undermined the often-substantial advances made over the past 20 years with
the result that millions of people now consider themselves ‘outsiders’, facing
poverty, lack of jobs and poor education. Legitimate criticism and protest are
too often met by intolerance and repression, and we have blights on the
national conscience; such as Nkandla, the killing of Andries Tatane and the
Marikana massacre, all of which are eroding our hard won parliamentary
democracy.


The ruling elite are living increasingly opulent lifestyles. Only a few in our
society are doing well and a small minority continue to own and control the
economy and resources of our country. The economic policies of both the
ANC and the main opposition, the DA, support this system. Racism is also an
ongoing reality. And, through the Traditional Courts Bill and the Secrecy
Bill, our people are being robbed of their democratic rights.

Little wonder then that millions of voters have abandoned their faith in the
ballot box. Increasing numbers have failed to either register or to vote in
successive elections since 1994. For example, some 12,7 million people
(46,9% of eligible voters) either did not register to vote (about 7 million), or
did register but did not vote (5,4 million) in 2009 when Jacob Zuma was
elected to power. This stay-away meant the ANC in 2009 increased its
majority and parliamentary seats to 66% (from 63% in 1994), when in fact
their share of all eligible votes decreased to 39%, (down from 54% in 1994).
As South Africans committed to democracy and social justice, we appeal to
all of you who have registered to come out and vote on May 7. You must
come out and either spoil your ballot in protest or vote tactically in ways that
will challenge the huge power and hold of the ANC over the electorate.
To spoil your vote, just write ‘NO’ across the ballot paper.

The ANC needs to know that it can no longer take for granted its traditional
support and we would be failing South Africa and our democracy by not
voting. After the elections the real work will start to create an inclusive and
transformative political programme premised on social justice, redistribution,
clean governance and democratic principles.

Join us by endorsing the Campaign and getting others in your Networks to do
the same.