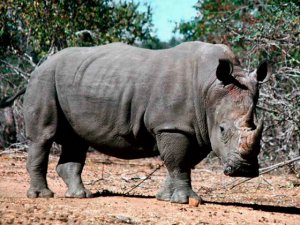 Vigilance and swift action of Rhino Anti-poaching Unit of the Department of Economic Development, Tourism and Environmental Affairs in the Free State averted a possible poaching of a rhino or rhinos in the Sandveld Nature Reserve at the weekend. While on routine patrol in the reserve next to Hoopstad 198km south east of Bloemfontein, members of the unit encountered three armed men suspected of attempted illegal hunt of rhinos in the reserve.

A gun fight ensued and one suspect was shot dead while two others disappeared in the reserve on foot. Police were called and one suspect was apprehended with one still at large. A .375 Hunting rifle, a silencer, assortment of machetes and axes and a number of spent cartridges were recovered from the scene.

The three suspects are linked to the recent spate of rhino poaching incidents in the Sandveld Nature Reserve and on the private farm in the area where three rhinos were killed. MEC Mosembenzi Zwane responsible for Economic Development, Tourism and Environmental Affairs in the Free State said, “Every effort to thwart illegal hunting and subsequent killing of these majestic animals should be applauded. We are happy that none of the members of the Anti-poaching unit was injured in the process”.

The suspect, who is from Rustenburg will appear in the Hoopstad magistrate Court today. Police and the other law enforcement units are working hard to track the third suspects. Four rhinos have been poached in the Free State this year alone.

Minister Tito Mboweni’s medium-term budget speech has once again failed to provide the fiscal leadership needed in our country, falling far short of making the tough decisions necessary to cut government’s wasteful expenditure and reduce debt. The Minister’s focus on preventing the country entering a debt trap, peaking at 95% by 2025, was well received. However, by his own admission, these plans are based upon President’s Ramaphosa’s economic recovery plan generating more employment and more taxes. →