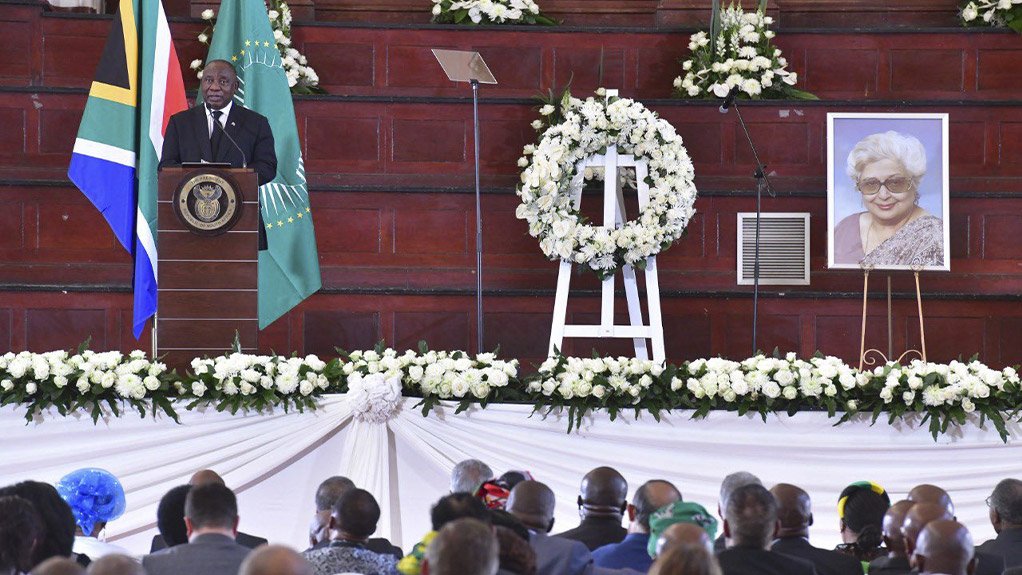 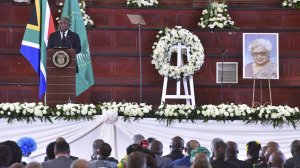 We gather here this morning to celebrate the remarkable life of Frene Ginwala, and to pay tribute to her profound contribution to the cause of freedom, peace and progress.

We remember a life that was as rich in experience as it was rich in meaning.

Frene Ginwala played many parts. She was a journalist, an author, an academic, a barrister and a Parliamentarian.

She was an activist, a feminist, a pan-Africanist and an internationalist.

Yet, no roll-call of her many achievements can adequately describe the person she was nor the impact that she made in the course of her life.

It is telling that among her earlier political assignments she was called upon to find ways for ANC leaders to clandestinely leave the country.

At a time of great uncertainty and danger, she established routes and identified means of passage where before there had been none.

Through ingenuity, through courage, through determination and diligence, she forged new paths.

Throughout her life she was a pioneer, a pathfinder, a leader in the true sense of the word.

She was instrumental in setting up the ANC’s first office in exile, establishing the base from which – over the coming decades – the organisation would forge what was probably the most powerful international solidarity movement of our time.

For three decades, she was a vital part of that movement, whether in Tanzania, Zambia, Mozambique, the United Kingdom or wherever else her assignments took her.

On whatever platform, given whatever opportunity, Frene Ginwala was an eloquent and persuasive champion of the cause of the South African people.

With her keen intellect, her measured delivery and her clear articulation of the principles and the purpose of our struggle, she felled many a critic and earned many a friend.

Through her writings, whether as a journalist, an academic or an activist, she provided both incisive critique and clear vision.

She told us what was wrong with the world and, most importantly, how it could be better.

Frene Ginwala will be remembered as a pioneer of women’s rights.

At a time when scant attention was given to the many ways in which women were oppressed and exploited, Frene fought for the struggles of women to be recognised.

In a political environment in which the dominance of men didn’t even invite comment, Frene Ginwala was one of the few voices that was consistent and insistent that women should occupy their rightful place in the struggle.

In this, she can be counted as part of a proud lineage of courageous women that have fought for the freedom of all in this country, men and women, black and white.

She can be counted among the ranks of those women who burnt their passes in Bloemfontein in 1913 and among the women who marched on the Union Buildings in 1956.

She can be counted among the women who joined the ranks of Umkhonto we Sizwe in the aftermath of the 1976 uprising and those who marched on Parliament in 2019 to call for an end to the murder of women by men.

Frene Ginwala was prominent among those within the liberation movement who were instrumental in crafting a vision for a democratic South Africa that was both non-racial and non-sexist.

After a difficult and protracted struggle, she was among those that won broad acceptance for the idea that no country can be free for as long as its women are not free.

Having won the principle of non-sexism, Frene Ginwala was among those who were determined to give it effect.

It is therefore not surprising that after her return to South Africa, Ginwala formed part of the task force to establish the ANC Women's League in the country.

She helped to set up and became the convenor of the Women's National Coalition, which brought together women from across the political spectrum to draw up a women's charter.

This formation played a critical role in ensuring that the rights of women received proper attention in the negotiations process and were enshrined in the new constitutional order.

As we bid farewell to Frene Ginwala, we must recognise that this struggle – for equal rights and opportunities for women – is far from won.

As a society, as a state and as a movement, we have yet to give full effect to the principles of non-sexism and gender equality.

Despite significant progress, women are still under-represented in positions of authority, responsibility and influence across nearly all areas of public life.

And despite the progressive policies we have pursued since the advent of democracy, women are still over-represented among the poor, the unemployed and the vulnerable.

As Frene would remind us, until we have achieved equality between men and women in all spheres of life, we will not be free.

We will remember Frene Ginwala as a pioneer in building our democracy from the ruins of apartheid.

As part of the ANC’s negotiating team, she brought all her legal training, her sharp mind and her political conviction to the task of forging a new constitutional order in South Africa.

Yet it was in her role as the first Speaker of a democratically elected National Assembly that she had the greatest and most enduring impact on our young democracy.

Over the course of a decade in that position she forged a new institution that reflected the great diversity, the struggles, the aspirations, the culture and the practices of the South African people.

With her calm and deliberate determination she forged an institution that stands at the centre of our democracy.

It is an institution that continues to this day to fulfil its Constitutional purpose as the representative, the voice, the champion and the instrument of the people.

She performed her role as Speaker with diligence, fairness and integrity.

She was always mindful that it was her responsibility to serve the people and to do everything within her means to advance their cause.

Frene lived, fought and strived as we all should – selflessly, honestly, courageously, driven by a deep and abiding love of humanity.

She stood for a South Africa that was united in its diversity.

She cherished a society where all may embrace and celebrate their many identities, many cultures, languages and faiths.

She stood firm against the abuse of power and corruption.

She stood firm against racism, sexism and all forms of intolerance and prejudice.

She stood for human rights for all and the rule of law.

To defend the aspirations of our Constitution is to honour the memory of Frene Ginwala.

To lead lives of integrity, whether as citizens or leaders, is to uphold her legacy.

These are the tenets of the Zoroastrian faith into which Frene was born.

She lived by them. Her life embodied them.

To her family, especially her beloved nephews Zav, Cyrus and Sohrab, we share in your sorrow.

May you be comforted by the knowledge that Frene’s spirit, her courage, her wisdom and her generosity will forever be remembered.

SA: Naledi Pandor: Address by Minister of International Relations and Cooperation, during the Bilateral Political Consultations with Mr Sergei Lavrov, Minister of Foreign Affairs of the Russian Federation, Pretoria (23/01/2023)

I would like to take this opportunity to welcome you and your delegation to South Africa and to thank you for honouring our invitation to visit our beautiful country. Today we have the opportunity to discuss and exchange views on how best we can work together to strengthen the good relations that our two countries enjoy. →